The multilateral treaty to protect the ozone layer has been a successful environmental agreement. But an impasse over restricting the use of extremely potent greenhouse gases is set to mar the 25th anniversary celebrations of the Montreal Protocol on September 16.

These gases, called hydrofluorocarbons (HFCs), emerged as the coolant of choice after the Protocol banned ozone-depleting chemicals used in the refrigeration and air-conditioning sectors. While developed countries seek to amend the treaty to bring HFCs under its radar, developing countries contend that the agreement does not and cannot have the mandate to regulate greenhouse gases. They say the amendment proposal is a ploy of rich nations to sell HFC replacement technologies and mint money.

Produced mostly in developed countries, HFCs replaced chlorofluorocarbons (CFCs) and hydrochlorofluorocarbons (HCFCs), that were phased out under the Montreal Protocol on Substances that Deplete the Ozone Layer. HFCs pose no harm to the ozone layer because, unlike CFCs and HCFCs, they do not contain chlorine that depletes the ozone layer. But it has been established that HFCs are not innocuous either. They are super-greenhouse gases with an extremely high global warming potential. This means they are capable of trapping enormous amounts of infrared radiations in the atmosphere and can cause a greenhouse effect a thousand times stronger than carbon dioxide.

It’s been four years since the issue of bringing HFCs under the Protocol’s ambit was raised. Developed countries say that since the rise in the emission of super-greenhouse gases is a consequence of the phasing out of CFCs and HCFCs under the Montreal Protocol, the same agreement should monitor them. Developing countries like India, China and Brazil, however, say that the emission and regulation of greenhouse gases fall under the purview of the United Nations Framework Convention on Climate Change (UNFCCC) and HFCs already figure in the basket of six greenhouse gases under the Kyoto Protocol. Developed countries following the Kyoto Protocol report their HFC emission data to UNFCCC; parties to the Montreal Protocol have no such obligation. The Indian government maintains that HFCs should be discussed under UNFCCC as a matter of princip le.

At the root of this argument is a doubt. Developing countries are apprehensive about the high cost of transition from HFCs to a safer option. A technology transfer mechanism is under discussion at UNFCCC. Developing countries trust the UN body to devise a more economical option than what could be provided under the Montreal Protocol. Besides, they say they have been toeing the line of the developed world for years, but not anymore. How so?

In accordance with the provisions of the Montreal Protocol, developed countries began phasing CFCs out in the late 1980s. Developing countries were granted a grace period till the levels of the harmful gases reached a threshold level in these regions. Only after that were they supposed to take on the commitments to phase CFCs out.

Once the phase-out began, developing countries were free of CFCs by 2010. But by this time the use of HCFCs increased sharply in these countries. In the fourth meeting of the Montreal Protocol in 1990, developed countries pledged to freeze the production and consumption of HCFCs by 2004, and phase them out completely by 2020. Developing countries consented to freeze them by 2013 and phase them out by 2030. This means that from next year onwards, developing countries are expected to move to gases with lesser impact on the ozone. And that should ideally be HFCs since they are the third generation gases already in use in developed nations.

But since HFCs have now been found to have a high global warming potential and their emissions are already on rise, developed countries maintain that developing countries should not use them as a replacement for HCFCs. In effect, they are asking developing nations to leapfrog to the next generation of coolants when they themselves continue to use HFCs. The argument is that unless HFCs are phased out along with HCFCs, the impact on global warming will be severe. But developing countries’ answer to the debate is a question—where are the alternatives to HFCs?

“We would have to completely depend on four companies—DuPont, Arkema, Honeywell and Diakin—for the technology. We are not paying for another conversion,” says Sukumar Devotta, former chief of the National Environmental Engineering Research Institute (NEERI) and coordinating lead author of “Safeguarding ozone layer and global climate systems: Issues related to HFCs and PFCs”, a report by the Intergovernmental Panel on Climate Change and the Technology and Economic Assessment Panel.

“It has become a way for developed countries to earn money. First they asked us to phase out CFCs and use HCFCs. We borrowed technology from them. They gained financially. Now when we are phasing out HCFCs and are planning to go the HFC way, they are telling us to adopt a new technology which we know nothing about. How much time will this technology take to develop? When will it become commercially available?” asks Devotta, adding that these questions need to be answered before any shift is made.

According to a 2011 United Nations Environment Programme (UNEP) report, there is no one-size-fits-all alternative to HFCs. Even though technologies with low global warming potential are commercially available they cater to specific applications and geographic regions. There are certain barriers in their wider application. These products require regulatory approvals and new safety standards before commercialisation as they contain flammable or toxic gases like ammonia and propane. In most regions, except in Europe, low-global-warming-potential technologies are fairly minor players, says the report. With profits from the existing cooling systems booming and no effective regulation on HFCs, there is little incentive for countries or companies to bring new products in the market. But Indian firm Godrej claims to be the first company in the world to have started making and selling air conditioners that do not use the HFCs as coolants (Setting a precedent).

Unlike many developed countries, EU has legislation to control the use of HFCs, which it calls the Fluorinated Gases Regulation or the F-gas Regulation. But a report by the Environment Investigation Agency, a non-profit in the UK, says that while EU has almost completed the phase out of HCFCs, its HFC emissions have risen by 28 per cent, and might rise to 82 per cent by 2050, even with the full implementation of the F-gas Regulation. The regulation, clearly, is not sufficient to address the HFC emissions. Studies indicate that if the increase continues in its present pattern, it would offset the benefits of Montreal Protocol. 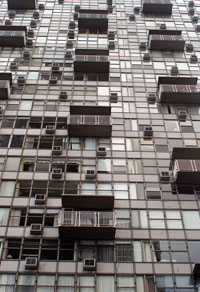 The HFC emissions are projected to reach 5.5–8.8 giga tonnes of carbon dioxide equivalent per year (GtCO2-eq/yr) by 2050. Carbon dioxide equivalent per year is the measure of a quantity that describes the amount of carbon dioxide that would have the same global warming ability as a given mixture and amount of a greenhouse gas when measured over a specific timescale. In comparison, emissions of ozone-depleting substances peaked at 9.4 GtCO2-eq/yr in 1988 and could have reached 15–18 GtCO2-eq/yr in 2010 in the absence of Montreal Protocol.

The UNEP report states that the current contribution of HFCs to climate change is less than one per cent. The problem, however, is that the emissions of the ones with longer lifespan are on the rise due to their extensive use in developed countries. Therefore, the argument returns: while developed world itself is using HFCs why should it burden developing countries with a new technology regime that is not even in place?

While the debate appears endless, research has linked global warming to ozone depletion, prompting the need for urgent action to check the levels of HFCs.

Bad news for the US

A recent study by Harvard University published in Science found that the US is under serious risk of ozone loss. During intense summer storms in the country, water vapour is thrust into an otherwise dry lower stratosphere. This water vapour reacts with the chlorine and bromine that have appeared in the atmosphere as a result of the widespread use of CFCs in the past. The products of these reactions damage the stratospheric ozone. While the use of CFCs has now declined, the chlorine and bromine released in the stratosphere might take decades to deplete.

More global warming would lead to more storms, and they will increase the risk of ozone loss, the study found. The news has come as a jolt to the US, which has been evading action on climate change and has maintained that it will not commit to any legally binding emission reduction target till emerging economies like India and China do so. Researchers also pointed out that a similar condition could exist over other mid-latitude regions. But while the scientific community continues to issue repeated warnings over environmental degradation, nations stay stuck in policy quicksand.
Special Report Special Report United States Of … UNFCCC UNFCCC UNEP Ozone Mitigation Ozone Layer Ozone Montreal Protocol Montreal Protocol Ministry Of … Ministry of … Kyoto Protocol India HFCs HFC-23 Green Products Green House Gases Godrej Global Warming Germany Emission Targets Electronics Industry Electronics Industry Developing Countries Climate Change Clean Development … China CFCs Atmosphere And Ozone … Atmosphere And Ozone …
SUPPORT US