It was not just cyclone Nilam that ruined paddy in Andhra 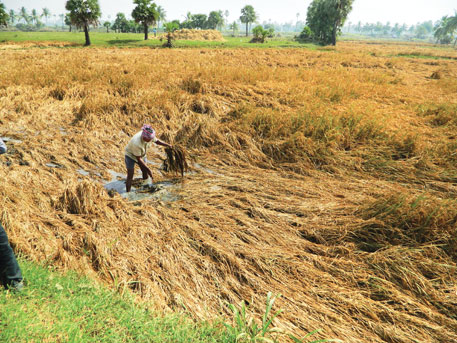 Ayireddy Pulliah, resident of Avidi village in Andhra Pradesh’s East Godavari district, lost all his paddy in the torrential rains and floods that followed cyclone Nilam. The cyclone struck the Godavari delta towards October-end when harvest was a few weeks away. Pulliah’s paddy fields on seven hectares (ha) were inundated for a week. “I had spent Rs 18,000 on an acre (0.4 ha),” he says.

Like Pulliah, hundreds of farmers in the delta region of East and West Godavari districts are left in the lurch. In the two coastal districts, known as the state’s rice bowl, 0.3 million ha of paddy fields were damaged.

What is more upsetting for the farmers is that the large-scale crop loss is not purely an outcome of the cyclone. Many fields were submerged due to flooding of the drainage channels. These channels, maintained by the state, are meant to drain excess water from paddy fields during heavy rains. But most of the drains are in bad state due to heavy siltation and weed infestation. Pulliah’s paddy fields were partially submerged due to flooding of the Gorrenkala drain. “When the drain overflowed, the floodwater spread one-and-a-half kilometres, submerging all the fields around,” he says. It took more than seven days for the water to recede. If paddy fields remain submerged under water for more than 72 hours, the crop starts wilting.

Vasamshetti Lakshmi of Nallacheruvu village in East Godavari district, a tenant farmer who took loan from a local moneylender for his kharif crop, lost paddy on her 1.6 ha because of flooding of a nearby drain. “I do not know how I will repay the loan,” she says. The majority of the farmers in the delta districts are tenant farmers. They are not eligible for compensation in case of crop loss since they do not own the land they cultivate.

Officials in the irrigation department agree with the farmers. The Godavari delta has a complicated system of crisscross, zigzag canals and drains, says Gopalakrishna Reddy, chief engineer of the delta. It has 4,578 km of main canals and their distributaries. There are about 1,000 major, medium and minor drains which are maintained by the irrigation department. Besides, there are hundreds of small, local drains looked after by the revenue department. “Most of the canals and drains are 150 years old. They need improvement works like desiltation, lining of the walls and weed removal,” says Reddy. 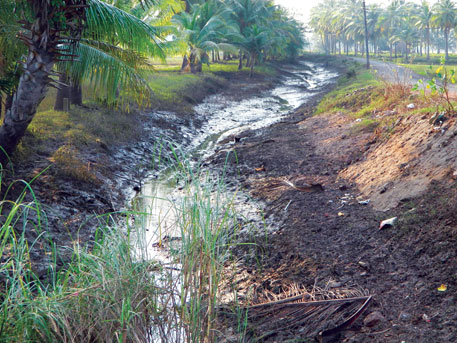 Another problem with the drains is that they cannot carry water if it rains heavily for five to six days as happened during Nilam. Nandamuru aqueduct in West Godavari can carry 8,000 cusecs (227 cubic metre per second or cumec) of water. But during the cyclone 20,000 cusec (570 cumec) reached the drain. People in the downstream delta opposed opening of the sluice gates, fearing submergence. Consequently, more than 4,000 ha of upland paddy fields were flooded. “The parts of the delta where drainage improvement work has been taken up lost 25 per cent of the crop, while others lost more than half,” says Reddy. After improving main canals and a few drains in 1991, the government took up the improvement work only this year, he admits.

Only Acts, no action

To look into the issues related to the drainage system in the Godavari and Krishna deltas, the Centre appointed a technical committee in 1964. The committee suggested improvement, repair and modernisation of canals and drains, including straightening of some drains, and levying cess on land owners who enjoy drainage facilities.

Subsequently, the state enacted the Andhra Pradesh (Krishna and Godavari Delta area) Drainage Cess Act of 1968. Under it, a tax of Rs 10 for an acre (0.4 ha) of cultivated land was to be collected annually from land owners. The Act was repealed in 1985 to make way for another Act that included the Pennar delta region. This Act, too, was repealed in 1997. At present, the Andhra Pradesh Farmers Management of Irrigation System Act is in force that encourages farmers to participate in the effective management of irrigation systems.

In the wake of severe floods in 1986, the state appointed an officer to prepare a comprehensive plan to permanently solve the drainage problem in the two deltas. The plan was submitted in 1987 but it gathered dust. Three years later, a severe cyclone hit the Andhra coast and devastated nine districts. The damage was estimated at Rs 2,200 crore; the drainage system suffered a loss of Rs 78 crore. As flood relief, the state received a loan of Rs 713 crore from the World Bank. Of this, the state earmarked Rs 21 crore for improving major and medium canals. All the minor drainage channels were neglected. Again, a major cyclone hit the state in 1996. Congestion in minor drains caused large-scale inundation of paddy fields. In 2006, when another cyclone hit the Andhra coast, the state appointed an expert committee to study how the irrigation and drainage systems in the two deltas were responding to cyclones and suggest solutions.

Based on the Rosiah Committee’s recommendations, the state approved Rs 3,361 crore for the modernisation of the system in the Godavari delta in 2007. “At present, we have enough funds. But no contractor has come forward to take up major work packages,” says Reddy. Of the approved funds, only Rs 420 crore has been spent. “We could settle some small work packages for canals and drains but for the remaining packages there was no response even after repeated calls for tenders,” says Reddy. A major reason for the contractors’ reluctance is that the work has to be completed within a few months and canals and drains have to be closed for six months after monsoon when there will be less river water.

Farmers would oppose the closure since sowing for rabi crop starts in mid-December. If canals are closed during this period, the crop will be deprived of irrigation. “Since the kharif crop is prone to damage from cyclones and floods, farmers in the two districts pin their hopes on the rabi crop,” says R V Sathyanarayana Raju, a farmer in Bhimavara village in West Godavari.

While the authorities struggle to decide on ways to improve the condition of drains, a new problem is arising. In the past few years, more than 40,000 ha of paddy fields in the Godavari delta have been converted into fish ponds by big farmers and landlords for aquaculture. Drains are encroached upon and blocked in many parts wherever fish ponds are being developed, says the irrigation department. Houses and temples have also been built on the embankments of canals and drains, which makes it difficult to widen them. Evicting encroachers is the revenue department’s duty, says Reddy. He adds that the irrigation department can improve the drainage system only when the revenue department, the police and farmers extend their support.