Heading towards a cliff

As India elects new government, the 12th Five Year Plan may no longer be pro-poor

Heading towards a cliff 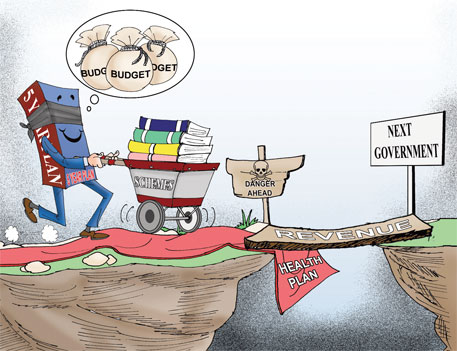 MUCH hope is pinned on the 12th Five Year Plan that was declared as the first health Plan by Prime Minister Manmohan Singh. The United Progressive Alliance (UPA) government, while drafting the Plan, also termed it “pro-poor” and promised the maximum budget for social welfare schemes. But as the Plan comes into force this fiscal year, two years after it was to roll out, uncertainties shroud its key agenda.

India is electing new government. In case of change of government, the terms of existing Planning Commission members will come to an end. The new government with its new team will look afresh at the Plan. If it finds UPA’s flagship safety net programmes, such as the Mahatma Gandhi National Rural Employment Guarantee Scheme (MGNREGS), the Food Security Bill, National Health Mission (NHM) and Right to Education, as burden, it may change the focus of the Plan. Besides, the Plan rolls out at a time when it is set for mid-term review.

The new government will not be able to scrap any scheme because these have the approvals of Parliament and the National Development Council. “But it can redesign the schemes,” says Saibal Gupta of the Asian Development Research Institute. “The nature of change will depend on the party that comes to power because a government implements its manifestos through five year plans,” he adds.

The Bharatiya Janata Party (BJP) in the opposition, which, according to exit polls, is emerging as the single largest party, has indicated that its focus will be on the economic growth of the country. Past performance of BJP-led National Development Alliance (NDA) shows that the party has never prioritised issues like poverty, hunger and malnutrition. Even for delivering services, the party is likely to rope in private players. This has proved problematic in past.

If the UPA is re-elected to power, it is likely to continue its flagship programmes, but, experts say, then quality of delivery of these programmes may deteriorate. The performance of regional parties—if they at all get a chance to lead the government—will be no better. A key reason behind this is reduced funds. The slow economic growth and consequent less revenue may restrain government spending. Experts say the focus of the Plan may undergo drastic changes to fit the reduced budget. 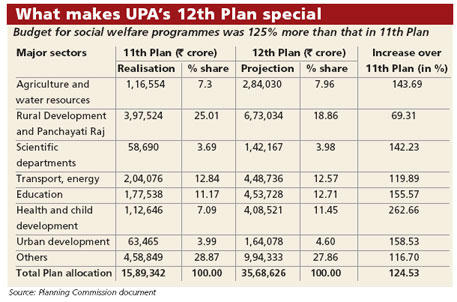 Planning Commission member Arun Maira admits that money will be a challenge for the new government to run safety net programmes. “The gap between the required and available money, which is set to widen in future, has started affecting these safety net programmes,” he told Down To Earth.

N C Saxena, former member secretary of the Planning Commission, elaborates this: NHM, a government plan to merge the National Rural Health Mission with a similar scheme for urban people, failed to take off because of fund crunch. Integrated Child Development Services Scheme still excludes children under three despite the fact that malnutrition sets in at birth.

So any government will begin its term with more focus on revenue generation, for which it is likely to promote industry and infrastructure.

Civil society groups who contributed to the Plan are dissatisfied with the way UPA handled the Plan. The Planning Commission conducted an extensive consultation with civil society to make the 12th Plan inclusive. As many as 900 organisations had contributed to it. But the UPA government’s initial enthusiasm towards social schemes has gone missing, activists say. Instead, it tried to minimise the fiscal deficit by curbing social expenditure.

A review of the last budget by non-profit Centre for Budget and Governance Accountability shows that the difference between allocations and expenditures in 2013-14 was Rs 6,483 crore. The Centre’s share in Centrally sponsored schemes had declined by 17.4 per cent. The budget estimate for the Rural Development Department was initially pegged at Rs 74,478 crore for 2013-14, but it was slashed to Rs 59,356 crore in the revised estimate for this year. 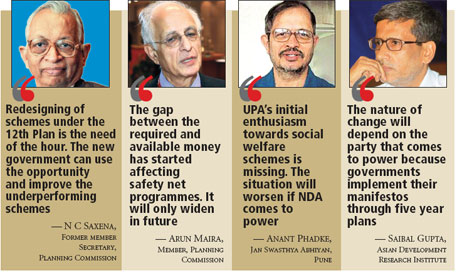 Anant Phadke from Jan Swasthya Abhiyan, an Indian chapter of People’s Health Movement, says initially while preparing the Plan, Planning Commission chairperson Montek Singh Ahluwalia quoted recommendations of the High Level Experts Group (HLEG), but did not include those in the Plan. HLEG recommended increasing public expenditure on health to at least 2.5 per cent of the GDP, but the Plan document recommends increasing the expenditure from 1 per cent of GDP at present to 1.58 per cent. The much awaited Universal Health Care is nowhere in the scene. Phadke says the situation will only worsen if NDA comes to power.

Civil society groups are suspicious of new government’s moves. Sachin Kumar Jain from Vikas Samvad, a Bhopal-based non-profit, says, “The UPA government has formulated rights-based legislation but expenditure on schemes under the laws is low. The new government will further decrease its focus on these schemes.”

Saxena says political parties can use the opportunity of redesigning programmes to make non-performing programmes deliver. Jharkhand, Odisha and Bihar are unable to use funds under MGNREGS. It needs redesigning to maximise the benefits it provides.

Food Security Bill that promises food grains to beneficiaries at subsidised rates is another such example. Alakh Narain Sharma, director of Institute of Human Development, says implementing schemes under the law is a challenge. So, the new government will have to ponder over the model to make it sustainable. Maybe the government can link the price of food grain to market price and provide it to beneficiaries at half or two-thirds of the rate, depending on the need of the beneficiary, Sharma suggests.

Besides, while redesigning, the new government may opt for the public private partnership (PPP) model for service delivery. So far, this model has generated only despair where people feel all profits are taken by private players at the cost of common man. Mihir Shah, Planning Commission member and former member of National Advisory Council that was set up to advise the prime minister, emphasises on the need to fix accountability of private players to make PPP models effective.

The 12th Five Year Plan recognises inclusive growth. If the new government acknowledges this fact, the only option left is to redesign these schemes and make them sustainable.