Good will from ice cream

Washing of ice cream vats at the Nirula's factory produced a liquid that was rich in milk fats and sugar, but had a high pollution potential. Distributing the 'milk shake' among students of a … 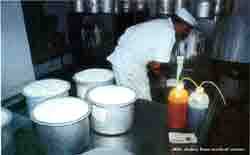 A CHILD at a blind school in the Okhla industrial area of Delhi feels his way around the school's grounds during recess, one hand clutching a stick and the other, a glass of milk shake. A curious combination, but the mystery is soon solved. The milk shake comes from the Nirula's factory nearby. And therein lies a successful waste minimisation tale.

The Nirula's factory produces about five tonnes of ice cream daily for its outlets. The process produces effluents that contain fat and high pollution potential. But Nirula's has converted this curse into a blessing. When the Delhi pollution control committee (DPCC) began breathing down Nirula's neck, asking it to instal an effluent treatment plant or face possible closure, the company approached the National Productivity Council (NPC). NPC scientists studied the factory's processes for a week and then worked out a simple solution.

The ice cream was made in huge steel vats that were cleaned with water after every batch. The water, containing a high percentage of fats from the cream, sugar and flavouring was the main pollutant because of its high biological oxygen demand (BOD). This would have necessitated a large and costly effluent treatment facility.

The waste minimisation plan initially centred around flushing the vats with milk to produce a sort of milk shake that could be distributed to the plant's employees. However, after introducing the milk wash, the management found the quantity of ice cream produced per batch dropped. Reason: Workers left behind greater quantities of ice cream in the vats to get richer milk shakes.

So it was decided to flush the vats with water instead and distribute the resulting mixture to students at the blind school. The vat was then again flushed with water, but this time, the quantities of milk fat and sugar in the water were smaller and meant a smaller load for the treatment facility.

Thus, for next to no investment, Nirula's saved 50 per cent on treatment costs and gained the blessings of many disabled people as well.