Wisdom from an obscure archipelago

In Down To Earth's first Country Report, ANIL AGARWAL and SUNITA NARAIN look at Papua New Guinea, its short but volatile transition to the market economy, its unique land tenure system and the …

Ask anyone to locate Papua New Guinea on a map and there are very good chances that he or she wouldn't know where to start.

Till recently, Papua New Guinea was a relatively obscure archipelago on the western rim of the Pacific. Portuguese colonisers first landed on the island in the 16th century, followed by hordes of the Dutch, the Germans, the British and finally, the Australians, but the colonising was done far from the world's attention.

The island nation became independent in 1975. Today, although the per capita income of its 4 million citizens is high, the wealth is spread unevenly and a high rural-urban disparity exists.

PNG's prosperity is largely a gift from its huge natural wealth of minerals and forests, which multinationals eagerly latched on to. The pace of exploitation has been so blistering that Papua New Guineans were virtually plucked out of a relatively peaceful, primitive lifestyle and dunked straight into the frenetic modern world. In fact, most PNG natives first saw the wheel on an aircraft than on a bicycle.

PNG's rich cultural diversity is paralleled by its abundant biodiversity. But perhaps the country's most outstanding feature is its system of land ownership: 99 per cent of the land is owned not by the government, weak as it is, but by 700 clans who have customarily possessed it. This hallowed tradition is proving to be crucial in PNG's key economic activities -- logging and mining. Outsider companies which ran rampant with these activities are being put in place by a citizenry that is willing to fight for its rights. Traditional landowners are beginning to assert themselves and are not only demanding a share of the profits, but also claiming compensation for environmental damage over the years.

In Down To Earth's first Country Report, ANIL AGARWAL and SUNITA NARAIN look at Papua New Guinea, its short but volatile transition to the market economy, its unique land tenure system and the mining and forestry sectors. 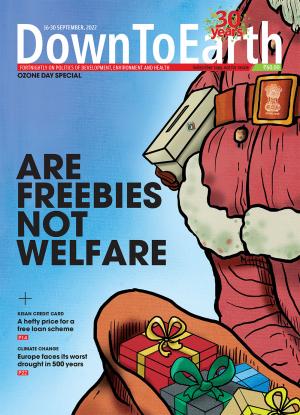