'Most countries don’t want to recognise indigenous people as people'

Mohammed Taghi Farvar, former director of Avicenna University in Iran, is a well-known ecologist and social scientist. At present, he is the president of Indigenous Peoples’ and Community Conserved Areas and Territories (ICCAs) Consortium and is a member of the Council of Elders of the Union of Indigenous Nomadic Tribes of Iran. He belongs to Shahsevan indigenous nomadic tribal confederacy. He spoke to M Suchitra on how the rights of indigenous people and their traditional knowledge remains largely unprotected in spite of international treaties. Some excerpts: 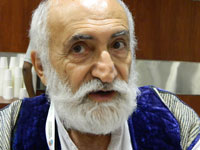 What do you think about CBD’s attitude towards indigenous and local communities?

The Convention on Biological Diversity (CBD) is a a legally-binding international treaty. All countries, except the US, have not only signed it but have also ratified it. The parties to the Convention are supposed to make legal framework in compliance with the treaty.

In 2004, in the seventh Conference of Parties (CoP 7), the Programme of Work on Protected Areas (POWPA) was approved and it has a section—Governance, Equity, Participation and Benefit Sharing in Protected Areas. Every state was required to report by 2008 what it has done about giving the indigenous people the rights over protected areas. But almost all of the states have simply not complied with that. Why? Just because they didn’t want to do it. Every country which is a party to the CBD is supposed to form a National Biodiversity Action Plan and they need to protect traditional knowledge of indigenous people and local communities. But the parties are simply not doing it. The problem with CBD is that compliance is very weak. No proper assessment and reviews are done.

Does it make much difference if we say indigenous and local communities?

Yes, a lot. The United Nations Declaration on the Rights of Indigenous Peoples, adopted by the UN general assembly in 2007, recognises that indigenous peoples have the rights to maintain and strengthen their distinct political, legal, economic, social and cultural institutions, while retaining their right to participate fully, if they so choose, in the political, social, economic and cultural life of the state. When you replace the word people with communities their legal rights are taken away. If CBD uses the word people, then there are certain rights the Parties will be legally bound to give to the indigenous people. But if they use the term community, then they can bring them under the rules and dominance of the state. The communities will be absolutely subjected to the control and dominance by the state. Most of the countries don’t want to recognise the indigenous people as people.

But is there consensus on this among the parties to the CBD?

But didn’t they apologise later?

Yes. They apologised. First, Australia expressed its apology. New Zealand followed suit. Canada also did the same. Finally, the US was forced to change its stance, too, and recognise the rights of indigenous people. But when it comes to the implementation, where is the commitment? Where is the compliance with CBD? Your government, my government and all other governments are no different.

Yes, it’s a kind of compliance. That’s true. But when India creates a national park or a protected area, does the Indian government consult the indigenous people and local communities who have been living there for generations or bother to take their prior informed consent? Do all the existing national parks in India have the participation of the original owners in the management of the parks? Do they get forcibly evicted? Is the legislation being implemented properly?

What do you feel about the present Access-Benefit Sharing mechanism?

But then, the UN is a collaboration of governments, not a collaboration of nations or people (laughs). Most of the time, governments unite against their people. It’s an artificial colonial construct. It’s high time that we dissolved the UN system and find something better. May be United People’s Organisation.