Yogesh Jadeja is the director of Arid Communities and Technologies, an organisation that has been active in Bhuj and Kachchh areas of Gujarat since 2004. He describes how the reintroduction of traditional systems of water management and the enlisting of para workers have been key to revitalising the arid region 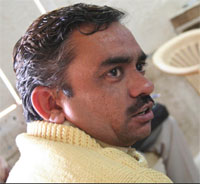 Describe your work in Kachchh and Bhuj region

I focus on land and water resources management. Kachchh is an arid region. Every morning brings with it the uncertainty of water. Rainfall is irregular and so the problems of the area are compounded by drought. Large-scale deep boring has led to the depletion of ground water resources.

I developed a new approach for water management. I turned to traditional systems of water resource management instead of unsustainable solutions devised through water engineering.

My organisation focuses on four things: knowledge-based research and planning, institution building, capacity building at the rural level, documentation, and dissemination of information.

What are the traditional ways to mitigate drought?

Traditionally, water resources were planned and conserved for at least three years. The catchment areas of rain water were diverted to community ponds. Structures to store water were also constructed. People had a geological solution.

I implemented a watershed project in this region and encouraged a decentralized drinking water model. I got to know that every rivulet has an aquifer. I have been using these aquifers for setting up a storage system for drinking water. I rediscovered and reinvented a traditional system which was lost.

How have your efforts affected the lives of villagers?

I feel that in changing times, solutions to such problems must involve a synergy of traditional and modern practice. Now villagers have realised that if a source of water can be created at local level then they need not depend on the government’s project to bring water from the Narmada river.

Structures like ponds, lakes and check dams, have been constructed in a traditional way using modern technology. The government only planned to solve city’s problem by excluding the rest of the population. I am pursuing  decentralised plan so that people can make their own decisions.

What kinds of problems are you facing in the course of your work?

Convincing people to adopt new ideas is the main challenge. Another issue is that the government is not recruiting para water workers even after training them.

I was the member of the ground water working group of the Planning Commission, and I proposed the idea of para-advocacy. The Planning Commission accepted the idea of enlisting para-water workers who will participate in water conservation programmes at the panchayat level, and help villagers construct water conservation infrastructure like check dams and ponds. A temple was constructed near a lake in Bhuj city that blocked the water movement of lakes. After village residents intervened, the administration has ordered its demolition.