A march to highlight land struggles in India

Beginning October 2, activists will cover 75,000 km in a year

Gandhi Jayanti, October 2, this year is going to witness a new movement. Activists belonging to a non-profit, Ekta Parishad, will undertake a Jan Satyagraha Samwad Yatra to highlight the ongoing land and livelihood struggles across the country.

The yatra will start from Kanyakumari and reach out to cover various grass-root level struggles to lend them support. “The aim of the yatra is to ask all the people involved in grass-root struggles to come together so that we can push in for land reforms,” says P V Rajagopal, Ekta Parishad president. The yatra plans to cover a distance of 75,000 km, spread across 339 districts and 24 states in 358 days.

Ajoy Chaudhuri, Ekta Parishad national member says the main reason behind undertaking such a yatra is to understand what types of land struggle are underway throughout the country. “Land struggles not only involve acquisition of land by companies for big projects like POSCO. You have other types too. For example, in Jharkhand, the state government is giving land to adivasis and not to others living in the same village. 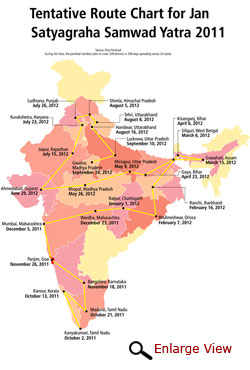 This results in disharmony. Then there are struggles for common land,” he says. “The number of such struggles is over 500, according to our estimates,” he adds.

“There are hundreds of movements where people are trying hard to resist takeover of the land by corporates and to convince the government to adopt more sustainable strategies, but the planners and decision makers are not willing to listen as their focus is just economic growth,” says Rajagopal.  He adds that similar circumstances forced the non-profit to take out a Janadesh Campaign in 2007.

The aim of the campaign was to press the government to give people who depend on land and forest ownership over these resources.

To press for the demand, the non-profit organised a dharna of 25,000 landless people from across India in October 2007. Following this, the UPA government at the Centre set up a National Council for Land Reforms under prime minister Manmohan Singh. The council has not met even once since it was formed.