A third of the world’s poor live in India, says UN 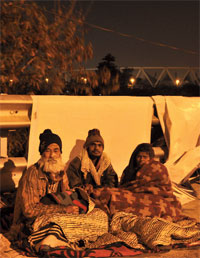 South Asia and Sub-Saharan Africa are home to the majority of the extremely poor people in the world, states this year's Millennium Development Goal report.

According to report, India is home of one-third of the extreme poor of this world, followed by China, Nigeria, Bangladesh and Democratic Republic of the Congo (DRC).

People earning below $1.25 (approximately Rs 75 a day) are defined as extremely poor and two-thirds of them are in five countries—India, China, Nigeria, Bangladesh and DRC. 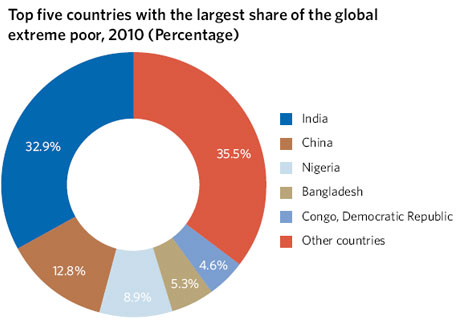 The report points to lack of frequent and qualitative household surveys on income and consumption in these countries as a major impediment. “Such countries often lack frequent, quality household surveys that could capture details on income or consumption, thus hampering efforts to design and implement appropriate policies and programmes that will tackle poverty..” sates report.

The report also says India is the capital of open-defecation. The vast majority of open defecators, which is around 82 per cent of total open defectors, live in populous countries like India and Nigeria. Open defecation is most prevalent in South Asia, Oceania and Sub-Saharan Africa.

The report says access to sanitation increased from 49 per cent in 1990 to 64 per cent in 2012, but there is still a long way to go. The target of MDG is to achieve 75 per cent access to sanitation by 2015. In 2012, 2.5 billion people did not use improved sanitation facility. The report says there is need of greater effort and investment to meet this target. According to report, in rural areas seven out of every ten people do not access to improved sanitation in rural areas. At this juncture, it seems unlikely that this target will be met. 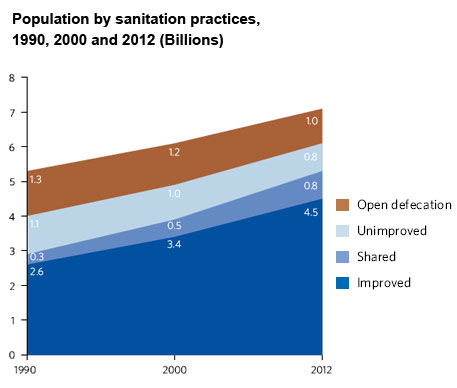 The report states that some efforts in human development have shown results. These relate to reducing poverty, containing diseases like tuberculosis and malaria, access to improved sanitation and water facilities, bridging disparities in primary school enrollment of boys and girls and political participation of women increased has shown result.

Poverty: In 1990, almost half of the population in developing regions lived on less than $1.25 a day. This rate dropped to 22 per cent by 2010, reducing the number of people living in extreme poverty by 700 million.

Malaria and tuberculosis: Since 1995, the worldwide effort to fight tuberculosis led to saving of 22 million lives worldwide. Between 2000 and 2012, an estimated 3.3 million deaths from malaria were averted due to the substantial expansion of malaria interventions. About 90 per cent of those averted deaths—3 million—were those of children under the age of five living in Sub-Saharan Africa.

Political participation of women: Political participation of women has been increasing since 1990. In January 2014, 46 countries boasted of having more than 30 per cent female members of parliament in at least one chamber. More women are now holding some of the so-called “hard” ministerial portfolios—such as Defence, Foreign Affairs and the Environment.

The report says there are some areas where a lot more needs to be done. These are as follows.

Threat to environmental sustainability: Global emissions of carbon dioxide (CO2) continued their upward trend and those in 2011 were almost 50 per cent above their 1990 level, notes the report.

Challenge of hunger: The proportion of undernourished people in developing regions has decreased from 24 per cent in 1990–1992 to 14 per cent in 2011–2013. However, progress has slowed down in the past decade, says the report. Meeting the target of halving the percentage of people suffering from hunger by 2015 will require immediate additional effort, especially in countries which have made little headway https://www.downtoearth.org.in/content/prices-rise-not-hunger, says the report.

Chronic under-nutrition: In 2012, a quarter of all children under the age of five years were estimated to be stunted—having inadequate height for their age. This represents a significant decline since 1990 when 40 per cent of young children were stunted. However, it is unacceptable that 162 million young children are still suffering from chronic undernutrition, says the report.

Child mortality and maternal mortality rate: Worldwide, the mortality rate for children under age five dropped almost 50 per cent, from 90 deaths per 1,000 live births in 1990 to 48 in 2012. Preventable diseases are the main cause of under-five deaths and appropriate actions need to be taken to address them, says the report. Globally, the maternal mortality ratio dropped by 45 per cent between 1990 and 2013. It has dropped from 380 to 210 deaths per 100,000 live births. Worldwide, almost 300,000 women died in 2013 from causes related to pregnancy and childbirth. Maternal death is mostly preventable and much more needs to be done to provide care to pregnant women, says the report.

The school enrolment rate in primary education in developing regions increased from 83 per cent to 90 per cent between 2000 and 2012. Most of the gains were achieved by 2007, after which progress stagnated. In 2012, 58 million children were out of school. High dropout rates remain a major impediment to universal primary education. An estimated 50 per cent of out-of-school children of primary school age live in conflict-affected areas, says the report.