Starch-rich foodstuff can become carcinogenic when exposed to high temperatures 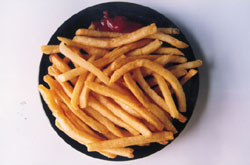 frying and baking of starch rich foodstuff at very high temperatures results in the formation of a carcinogen called acrylamide. This has been proved by a recent study conducted by Sweden-based Stockholm University. According to the university's researchers, foods with very high levels of acrylamide include French fries, potato chips and crackers. The researchers found that French fries sold at Swedish franchises of Burger King and McDonald's contained acrylamide about 100 times the equivalent of the World Health Organisation's (who) limit for water. For example, one microgramme of acrylamide was found in just half a gramme of potato chips or two grammes of french fries -- far more than the who limit. According to the who standards, per litre of drinking water should contain maximum of one microgramme of acrylamide.

Other food groups which were found to contain low as well as high levels of acrylamide were crisp bread, breakfast cereals, fried potato products, biscuits, cookies and snacks such as popcorn. Foods which are not fried, deep fried or oven baked during production or preparation were found not to contain any alarming levels of acrylamide. The carcinogen was not even detected in any of the raw foodstuff or foods cooked by boiling such as potato, rice, pasta, flour and bacon.

The us Environmental Protection Agency classifies acrylamide as a medium hazard probable human carcinogen. According to the International Agency for Research on Cancer, acrylamide induces gene mutations and has been found in animal tests to cause benign and malignant stomach tumours. It is also known to cause damage to the central and peripheral nervous system. Margareta Trnqvist, who led the research team, estimates that an average person eats dozens of microgrammes of acrylamide a day.

"Till yet, nobody was aware about the harmful effects of acrylamide. It is now important to obtain more information through international cooperation to be able to reduce the risks associated with acrylamide," said Leif Busk, head of the Swedish national food administration research and development department. According to him, acrylamide in food is a global problem that requires international action.

However, some scientists have criticised the study mainly on the basis of its limited scale. "The study is disproportionate and exaggerated. It is based on a small number of samples and the levels of acrylamide found in the foodstuff varied considerably. Moreover, the findings have not yet been published in a peer-reviewed scientific journal," said Magnus Ingelman-Sundberg of Stockholm's Karolinska Institute.