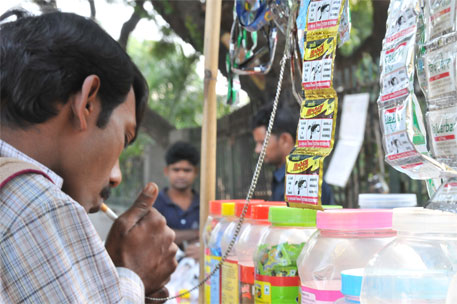 The Bihar government on Friday imposed complete ban on the sale of smokeless tobacco that includes products like gutkha, paan masala and zarda. Last year, the state had imposed a ban on gutkha.

According to National Cancer Registry Programme, around 50,000 people in the state annually die because of cancer and a majority of these deaths are due to excessive use of tobacco. Bihar spends about Rs 1,000 crore annually for treatment of cancer patients.

The announcement was made by chief minister Jitan Ram Manjhi at a program in Patna’s Gandhi Maidan on Friday. “We are worried over the rising number of cancer patients due to tobacco use. To control this menace, I announce complete ban on smokeless tobacco,” he said.

The CM also announced that the state government is working on raising the tax on cigarette and bidi by up to 60 per cent. “Transportation and keeping stock of smokeless tobacco will become illegal from November 15. Traders have been ordered to either dump or transport the existing stock outside the state within a week,” said Deepak Kumar, state health secretary.

Will the ban work?

On being asked why government is not banning cigarette, bidi and khaini, Deepak Kumar said that there is plan to raise tax on cigarettes and bidis. “We will see how ban on smokeless tobacco is working on the ground before banning cigarettes and bidis,” he said. The official also informed that raids and inspections will be held regularly to ensure effective enforcement of the ban.

Khaini which is one prominent forms of smokeless tobacco is also consumed heavily in the state. However, according to the food safety commissioner Anand Kishore, ban on khaini is not being imposed as it is a major crop that supports thousands of farmers in the state. The ban can be imposed only after the state government provides an alternative to those who earn their livelihoods by growing the crop.

A recent survey by the World Health Organization claims that 53.5 per cent population in the state is addicted to one form of tobacco or other. Nearly 49 per cent of these are consumers of smokeless tobacco.