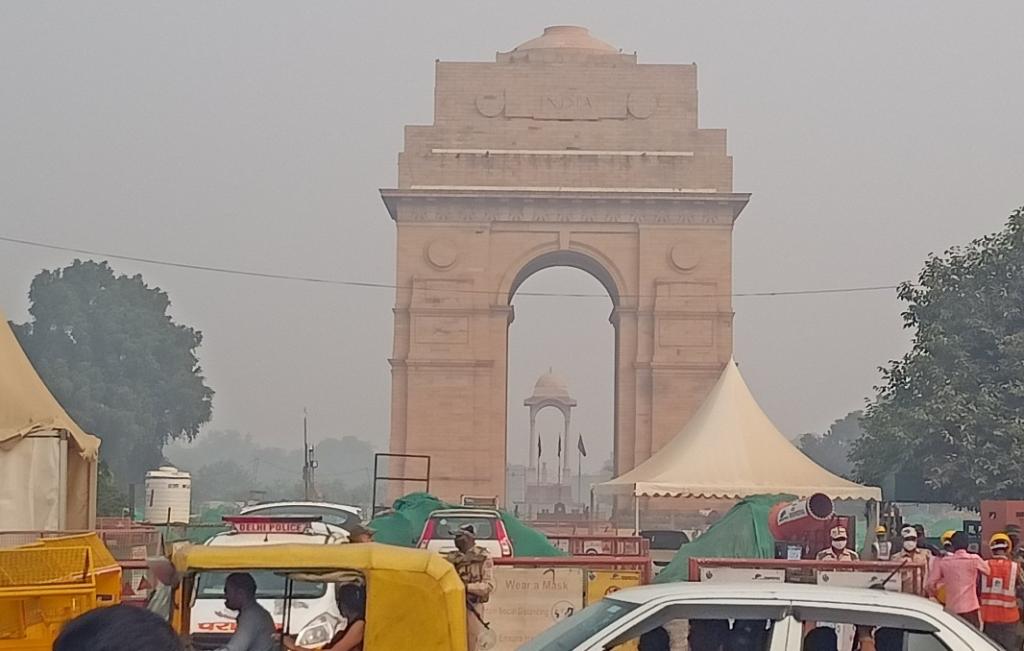 An analysis by Down To Earth (DTE) has shown that annual lockdowns in Delhi can have drastic improvement on the air quality in the national capital.

The debate regarding the smog episode in Delhi this time has mostly centred on pollution due to stubble burning by farmers, chiefly in Punjab and Haryana.

However, a closer analysis of vehicular pollution due to nitrogen dioxide (NO2) levels shows a 48 per cent reduction in such pollution is possible from current levels.

According to an analysis by Delhi-based non-profit Centre for Science and Environment (CSE), “Vehicles are the biggest contributor among the local sources in Delhi.”

Vehicular pollution was the biggest emitter of Delhi’s local pollution, with a share of just over 50 per cent from October 24 to November 8, 2021.

This translates to about 15 per cent of overall pollution sources (external and local combined). The share of pollution from stubble burning stood at 14.5 per cent during the same time period.

NO2 is released in the air through the burning of fuel from vehicles and power plants. DTE analysed and visualised NO2 levels in the capital and compared data from the October-November period of 2020 and 2021, with the lockdown phases from last year and during the COVID-19 second wave this year. 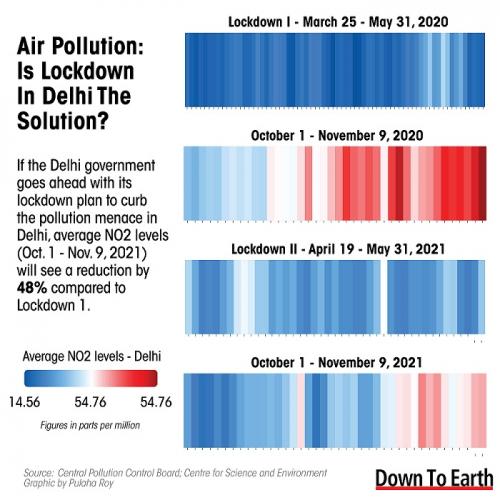 According to DTE’s analysis, there was a stark contrast in NO2 levels as visualised in the graphic.

Lockdowns (March to May 2020) had the biggest impact in terms of curbing vehicular pollution as the data shows, even when compared to the lockdown which was declared by the Delhi government during the second COVID-19 wave.

Compared to 2021, the October-November timeframe from 2020 shows more NO2 levels, suggesting more vehicular movement with an average NO2 level of 62 parts per million (ppm) against an average of 42 ppm.

The average NO2 levels for Lockdown 1 and lockdown in Delhi during the second wave were 22.5 ppm and 34.7 ppm respectively.

Particulate matter (PM) 2.5 has the highest share in the air quality index during the winter season. But NO2 is a better indicator for understanding the pollution situation in the capital since it is released from vehicles, which happen to be the biggest contributor. Also, PM2.5 is seasonal in nature, so the levels fluctuate.

So can a lockdown curb the pollution menace which the capital experiences every year at the onset of winter? Avikal Somvanshi, programme manager for sustainable cities at CSE, said, “A lockdown can bring down pollution levels but it is an emergency measure and short-term at best.”

According to Somvanshi, there needs to be better pollution management in terms of cutting down pollution from every source — vehicles, construction and better incentives by the governments for managing stubble. Finally, there should be a need to move to cleaner technology for day-to-day activities.