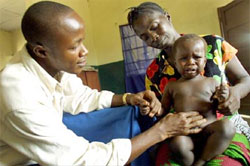 While three countries in West Africa are busy waging a battle against the deadly Ebola, it is time for another viral haemorrhagic fever to knock the doors in the region.

The health workers are now worried that resources to fight Lassa fever are inadequate as most of the infrastructure and human resources are already overstretched with Ebola. According to BBC, Lassa fever, every year, infects 300,000 to 500,000 people, killing up to 20,000. Liberia, Guinea and Sierra Leone, three countries affected with Ebola are all prime targets for Lassa. Weeks after successfully containing Ebola, Nigerian media have already reported an outbreak of Lassa in one of its states.

A major challenge in detecting and treating the disease is that several infectious diseases endemic in the region—including malaria, typhoid fever, and Lassa fever—mimic the initial symptoms of Ebola virus disease. Patients infected with these diseases will often need emergency care. Their doctors and nurses may see no reason not to suspect Ebola and see no need to take protective measures.

How Lassa is different from Ebola

Lassa fever is a serious viral disease that affects the blood, liver and spleen, and similar to the fever caused by Ebola (a viral disease believed to be harboured by fruit bats) and Marburg viruses.

A Lassa outbreak, however, is caused by rats. The rodents carry the disease into homes and food stores, especially in the dry season running from November to April. The disease, like Ebola, has a fatality rate of 70 per cent and needs people to be treated in isolation. Although the fever is a treatable condition unlike Ebola viral disease, its symptoms are varied and nonspecific, therefore making clinical diagnosis difficult. The disease is treated with a drug Ribavirin.