An ancient skull discovered in Israel seven years ago could give hints on the earliest migrants from Africa. The skull, dating back to 50,000 years, was unearthed from the Manot Cave in Western Galilee, Israel, in 2008. Scientists have named the fossil Manot 1.

According to a BBC report, physical features of the skull, such as a distinctive “bun-shaped” region at the back, resemble those found in the earliest modern humans from Europe. “This implies that the Manot people were probably the forefathers of many of the early, Upper Palaeolithic populations of Europe”, Israel Hershkovitz, from Tel Aviv University and one of the authors of the study, told the Nature podcast. 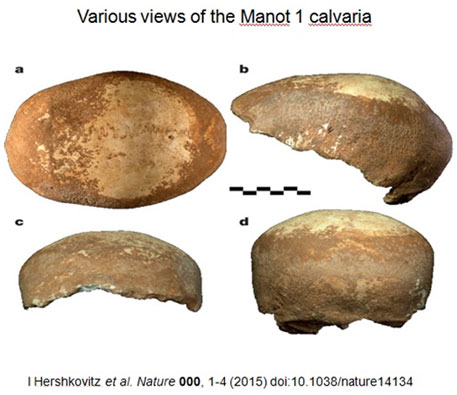 A report in The Huffington Post says that the bun shape of the skull resembles recent African and ancient European skulls, but differs from modern humans from the Levant, the eastern Mediterranean region that includes Israel. Researchers believe the individual whose skull they discovered lived at a time when modern humans are thought to have interbred with Neanderthals.

Hershkovitz adds that this is a key skull in understanding modern human evolution as this is the first evidence that shows there was indeed a large wave of migrants out of East Africa, crossing the Sahara and the Nubian desert and inhabiting the eastern Mediterranean region 55,000 years ago.
Researchers plan to hunt for more such fossils in Manot Cave in July.

The study has been published in the journal Nature.