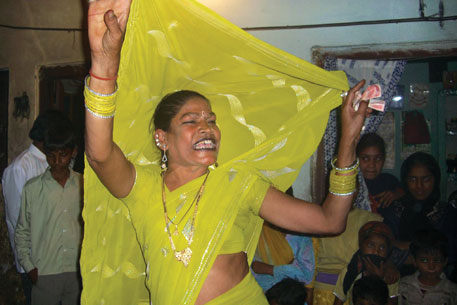 THE Indian transgender community won its biggest battle ever on April 15 when the Supreme Court granted it the status of third sex and recognised its constitutional and legal rights. Although an integral part of society, transsexuals, or hijras, have faced discrimination for ages and, therefore, the victory, coming at the end of a long struggle, is historic.

Pronouncing the verdict, the Bench of Justices K S Radhakrishnan and A K Sikri stressed the need to provide necessary healthcare to transsexuals by making suitable changes in policies. “Central and state governments should take proper measures to provide medical care to transgenders in hospitals and also provide them separate public toilets and other facilities,” the Bench remarked. The landmark verdict came on a petition filed by National Legal Service Authority (NALSA) in 2012, urging the apex court to grant equal rights to transsexuals who suffer discrimination even in hospitals. Abhina Aher, a transgender activist working on health issues, says, “Transgenders are extremely vulnerable at hospitals. Males and females have separate queues but transsexuals have nowhere to go. Women do not let them join their line and if they go to the men’s queue, they are harassed verbally or sexually.”

They face a similar problem during treatment. Hospitals are not ready to admit them in male or female wards. Most doctors, too, are reluctant to examine transsexuals, forcing them to approach quacks who invariably complicate the medical condition. The community has no social acceptance and for most people, it is an object of hatred, pity or ridicule, says Aher.

V Jayaraman, a Chennai-based sexual reconstructive surgeon, says, “Most doctors, have no knowledge about transsexuals. Some plastic surgeons and endocrinologists do conduct their surgical and hormonal treatment, but primary healthcare is a big concern.” Kalki Subramaniam, a transsexual who runs Sahodari, a non-profit for transgender rights in southern states, says their problems begin from childhood. “Transsexuals are not admitted to schools. They join sex work at a young age and soon develop health problems. They have to rely on quacks,” she says.

A report by the United Nations Development Programme, published in 2010, attests to the activists’ fears. It states that healthcare professionals do not have adequate knowledge about sexual minorities and, therefore, transsexuals face “unique barriers” accessing public or private health services. “Transsexuality should be included in the medical curriculum to make doctors aware of our special needs,” says Subramaniam.

Most hospitals are ill-equipped to address transsexuals’ specific medical needs, including surgeries. In 2013, India HIV/AIDS Alliance, a Delhi-based non-profit, conducted a study to review gender transition-related health services for Male to Female (MtF) transsexuals. It found a serious lack of free Sex Reassignment Surgery (SRS) for reconstruction of genitals in government hospitals. Transgender activists say such services should be offered for free in government hospitals similar to treatment for cancer and other serious diseases.

Most transsexuals cannot afford SRS. They approach quacks for the operation, putting their health at serious risk. The study also found that qualified medical practitioners are unwilling to prescribe hormone therapy for feminisation. This may be because of absence of a national policy on gender transition services.

The Ministry of Social Justice and Empowerment constituted a committee of experts to study the problems of transgenders in October 2013. It found that SRS and other gender transition-related services were not available free in tertiary-level government hospitals. India has limited expertise on SRS, including metiadiaoplasty (penile construction) and other surgical and non-surgical options available to transsexuals. The committee’s report states that because healthcare providers have limited knowledge, many Female to Male (FtM) transgenders self-administer male hormones.

While pronouncing the verdict, the Supreme Court directed that the recommendations of the expert committee should be examined and implemented within six months. The judgment is likely to have a wide impact on the country’s healthcare system. Shaleen Rakesh, director of India HIV/AIDS Alliance, says it would affect not only transgenders, but also the LGBT community. “The verdict will boost the HIV awareness campaign. The Centre will also have to provide clear policy instructions to the states on the subject,” Rakesh says.

Experts say the national Health Mission should have a support system for children who are confused about their sexuality. This makes it difficult for them to decide which surgery to opt for. They face extreme psychological trauma in accepting that they are different. Families also put pressure on them to adopt more socially acceptable behaviour. At times, these children are forced to undergo SRS. The apex court described this as immoral and illegal.

During the expert committee’s meeting in November 2013, Anil Sain, chief medical officer, directorate general of health services, says that since health is a state subject, state governments should designate appropriate hospitals for SRS.

The committee’s report, finalised on January 24, 2014, recommends issuance of an executive order on providing essential gender transition services, including SRS, in public hospitals. It also proposes that a national clinical guidance document should be prepared in line with the World Professional Association of Transgender Health (WPATH) guidelines. WPATH recently published its seventh guideline for healthcare of transgenders.

Laxmi Narayan Tripathi, a Mumbai-based transgender activist and one of the petitioners, told the committee that in Thailand the government has set clear-cut guidelines for the treatment of transgenders and that the model is worth emulating.

Judgement: Judgement of the Supreme Court of India on transgender community, 15/04/2014