Asbestos: it cements the government 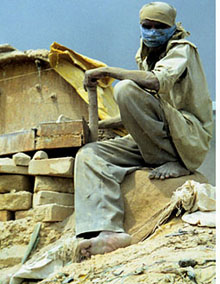 the Government of India is preparing a report to show the hazard to workers' health from white asbestos is manageable. This came out in a response of the Union Ministry of Chemicals and Fertilizers to a Right To Information application by Madhumita Dutta of the Corporate Accountability Desk, an ngo in Chennai. Over 40 countries have banned all uses of white asbestos, also called chrysotile, owing to the unmanageable occupational health risks.

The mineral accounts for 94 per cent of the global trade in asbestos and is used as binding fibre in cement, fire retardants and automobile brake lining, among other things. The World Health Organization says it is a human carcinogen, killing at least 90,000 people every year of asbestos-related diseases such as lung cancer and mesothelioma. An occupational health group estimates asbestos kills one person every five minutes, more than any other industrial toxin. Cheap, safe alternatives to chrysotile, like cellulose fibres, are readily available but the asbestos industry has thwarted the switch.

The Indian government has traditionally preferred the interests of the asbestos cement industry, consistently ignoring evidence of its harms. The report will enable the Indian government to go to Rome in October 2008 and argue in favour of unrestricted trade of white asbestos under the Rotterdam Convention. India along with Canada and Russia is seen as the dirtiest player in the international negotiations to bring white asbestos in the 'prior informed consent' (pic) list of the convention, which will require exporting countries to obtain the prior consent of importing countries.

The study on which the ministry's report is based is partly funded by the Asbestos Cement Product Manufacturers Association, which paid Rs 16 lakh while the government paid Rs 43.66 lakh. What surprised occupational safety campaigners is the agency that conducted the study: the National Institute of Occupational Health (nioh), which in the past has come out with studies defending workers' health.

The study's terms of reference reveal the government's intent. Here's what the ministry's April 2006 letter demanded of nioh : "The deliverables will include generation of data which would justify the safe standards of its usage and the reasons justifying its non-inclusion/or otherwise in the pic ambit." The minutes of an April 2007 meeting of the ministry's review committee (half of which comprises asbestos industry representatives) gave nioh a sharper focus: "It will specifically indicate as to how technology has made working conditions better. The same will include relevant photographs showing protective measures being undertaken." A December 2006 meeting minuted this: "The report will be finalized after due discussions with the asbestos industry."

Dutta said though the entire study has not been made available, it is evident it does not have the sample size of 1,500 people as per who protocol; instead of four years, as decided earlier, the report is being rushed through in two; and the study is not to be reviewed by any independent scientists. "After several requests, only one industry report--of Everest Industries in Kolkata--was made available to us. That too shows 32 per cent of the workers there have impaired lung functions of the restrictive type, a symptom associated with chrysolite ingestion," she said.

On April 18, 2007, the review committee felt the report didn't adequately address the industry's requirements: "S Ganesan of icc (Indian Chemical Council) and nioh representatives will redraft/re-word the Kolkata report keeping in view the international sensitivities." Ganesan's claim for the job: expertise in championing the pesticide industry in international negotiations.

Dutta has released a report on the response of the ministry called A Fox in the Hen House that is endorsed by 13 trade unions and occupational health groups. "We have repeatedly demanded a ban on asbestos, but the government plays the industry's game," said H Mahadevan of the All India Trade Union Congress.

Ashim Roy of the New Trade Union Initiative said the credibility of nioh is damaged severely. The institute's past epidemiological studies of asbestos cement, textile factories and mining areas have shown the harmful effects of the mineral. Its website details the hazards of asbestos in various sectors: "Cases of asbestosis were observed in workers having less than 10 years exposure in contrast to the reported average duration of over 20 years."