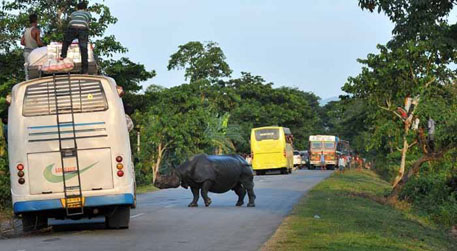 The government of Assam recently proposed to build elevated roads with viaducts on stretches of National Highway 37 (NH37). The highway acts as a boundary to the Kaziranga Tiger Reserve, also famous for the One Horned Indian Rhino. The proposal has been made in response to an order issued by the National Green Tribunal (NGT) in November 2013.

It has been claimed that the proposed elevated roads would provide easy passage to animals crossing between Kaziranga and the adjacent Karbi Anglong Elephant Reserve, which lies to the south of the tiger reserve.

Earlier, the Central government had made a proposal to tackle elephant deaths on railway tracks. At that time, the Supreme Court had snubbed the Solicitor General of India, who had appeared on behalf of the Centre, and said “why not put up a road sign as well to inform elephants about these safe passages?”

A case filed by Right to Information activist Rohit Choudhury, in NGT (in August, 2013), had pointed out that NH37 had become a menace for animals crossing from one reserve to the other. Choudhury, who used RTI to obtain data from the government, concluded that vehicular hits caused more than 250 animal deaths between 2003 and 2013. The deaths include two tiger deaths in 2005 and six leopard deaths in about a decade (see table).

The state government, which in 1991 promised to decongest the stretch, has not been able to keep its promise. Present government data reveals that every day more than 6,000 vehicles pass through the stretch of NH37 that borders Kaziranga.

Moreover, in 1991 itself, the Union Ministry of Environment and Forests gave clearance to a refinery in Numaligarh (now in Golaghat district of Assam) and less than 20 km from Kaziranga. One of the preconditions for setting up of the refinery was to denotify a stretch of about 66 km of the road that runs close to the reserve and create an alternative route for passage of animals. Even though the construction of refinery was completed in 2000, the alternative route was not created, says Choudhury.

In its new proposal, the state’s wildlife department has identified eight animal crossing points, including one for Hollock Gibbons. Of these eight, the proposal is to build six elevated corridors with viaducts; a canopy-based overhead crossing for the Hollock Gibbons and realignment of 2.5 km of the road. See (Table and map) 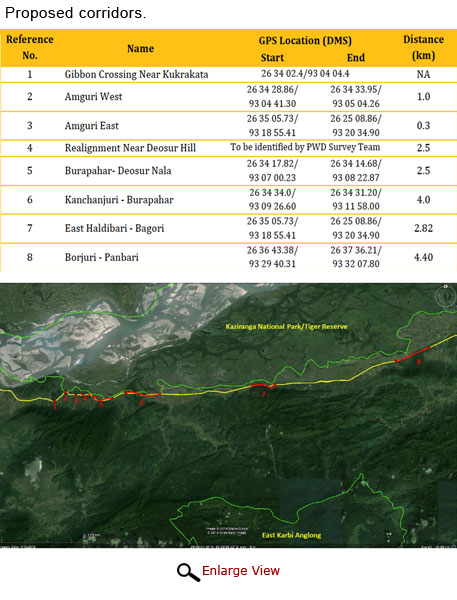 Order of the National Green Tribunal on road construction in the Kanziranja Sanctuary, 29/10/2013

Order of the National Green Tribunal regarding NH-37 passing through Jakhalabandha to Bokakhat going through Kaziranga National Park, 09/10/2013