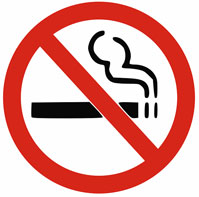 Now, tobacco manufacturing companies will have to devote at least 85 per cent of the surface areas of all tobacco product packets on both sides to graphically and literally represent health warnings.

Beginning April 1, 2015, every tobacco product will carry on both sides the pictorial depiction of throat cancer and a message in English, Hindi or any Indian language. As per the new gazette notification amending the Cigarettes and Other Tobacco Products (Packaging and Labelling) Rules, 2008, published on Wednesday, the Centre has made it mandatory to give 60 per cent of the space must be devoted to a picture and 25 per cent to the legend.

Earlier, the Ministry of Health and Family Welfare (MoHFW) had constituted an Expert Group for Development of Pictorial Health Warnings for tobacco products with representation from MoHFW, WHO India, BIoomberg Initiative partners, Voluntary Health Association of India (VHAI) and a few other experts. The committee members supported the decision to design/develop pack warnings and field-test them for their efficacy.

Union health minister, Harsh Vardhan, said, “Graphic health warnings using a mixture of pictures and words are part and parcel of every country’s policy on cigarette marketing. Many studies have established that the inclusion of larger and more noticeable health warnings on packages significantly impact life expectancy rates and lead to savings on medical costs.”

Executive Director, VHAI, Bhavna Mukhopadhyay expressed her happiness with the decision of raising the bar on this important public health measure. The decision has potential to save millions of lives. This is indeed a landmark decision, in the history of Tobacco Control, placing India at number one position globally, alongside Thailand, she added.

The Cigarettes and other Tobacco Products (Prohibition of Advertisement and Regulation of Trade and Commerce, Production, Supply and Distribution) Amendment Bill, 2012

WHO report on the global tobacco epidemic, 2013

Tobacco packaging regulation: An international assessment of the intended and unintended consequences