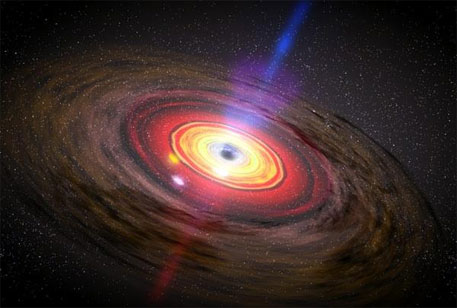 Is black hole all over your mind after watching the lately-released sci fi film Interstellar? If yes, here is something new about the region of spacetime that has amazed the scientists and might amaze you as well.

A new study has now revealed that the giant black hole at the centre of the Milky Way may be producing some mysterious particles. The emission of these particles, known as neutrinos, may contribute to the understanding of the source of high-energy cosmic rays in the space as figuring out where high-energy neutrinos come from is one of the biggest problems in astrophysics today.

Neutrinos are tiny particles that carry no charge and interact very weakly with electrons and protons. Unlike light or charged particles, neutrinos can emerge from deep within their cosmic sources and travel across the universe without being absorbed by intervening matter.

The Earth is constantly bombarded with neutrinos from the sun. However, neutrinos from beyond the solar system can be millions or billions of times more energetic.

According to a report in Astronomy.com, the evidence for this came from three NASA satellites that observe in X-ray light: the Chandra X-ray Observatory, the Swift gamma-ray mission, and the Nuclear Spectroscopic Telescope Array (NuSTAR).