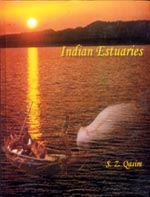 At Lothal, among the ruins of Harrappa, is a semi-rectangular dockyard. Constructed in 2300 bc at the head of the Sabarmati Estuary, the dock is the first recorded exploitation of the potential that estuaries of Indian peninsula hold. S Z Qasim begins his book with this dockyard. He takes half a page to describe the dockyard with exactness: its depth and dimensions, its uses and centrality to the now lost civilisation.

Read the rest of the 400-odd pages and you realise this exactitude is almost fetishistic. His depth of knowledge and reading comes through with such alacrity that the average Indian academic might feel a little scared going through it. Qasim admits he has called in all kinds of favours from friends, old colleagues and students to collect all possible information on the subject. The effort reflects well.

But he does belong to the old school of academic writers. The book does not temper into wild literary meanderings. Information is kept staccato. Each page is like a shelf. The prose always remains subservient to information; almost a reminder of the first few attempts in the early 1980s by academics to produce readable books for the 'non-experts' in English.

The book has two clean sections -- estuaries of the east coast and those of the west coast. 25 estuarine systems, including the Godavari, Cochin backwaters, Narmada, and Mahim systems are laid bare: from details of the microbiology to the hydrography. Each sentence in the discussions, rarely, if ever, is allowed to find space without a scientific paper to back it up as reference material -- each sentence helps to make a threadbare description. If you are looking for a gentle read then this is not perhaps the book to pick -- this is a book of thick technical descriptions.

Reading the book, one would think that Qasim, now the vice chairperson of the Delhi-based Society for Indian Ocean Studies, has revealed all. But, he confides, he does hold back a lot. "The book is descriptive in nature, meticulously detailed but it does not talk of the problems that the estuaries face today." And the problems that plague the estuarine system are gargantuan, he admits. He cites the example of the Hooghly estuarine system. The total quantity of waste discharged (industrial and municipal) here has been estimated as 1,153.80 million tonnes per day. This generates a bod load of 106.26 tonnes and a solid load of 2,318.41 tonnes/day.

The issues of pollution he promises to talk of in his next book, which is to come out very soon. But you will not grab too much contextual information in that. So buy your copy of Indian Estuaries so that you are loaded on information, and on how to tackle the next one.