Closure order has no effect on brick-making unit 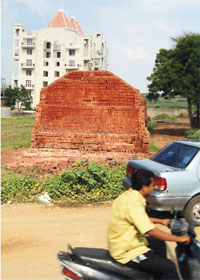 PEOPLE who purchased flats in Mohammadwadi in Pune’s outskirts over the past few years are ruing their decision to move out of the city. They are unable to breathe fresh air or go outdoors for walks because of a brick kiln that spews smoke next to their homes. An estimated 50,000 people living in and outside the 150-acre residential estate, developed by Nyati Builders, are affected. The Nyati Estate Cooperative Housing Society where 400 families reside is barely 500 metres away from the kiln. Deepak Sethi, a 63-year-old retired army officer who purchased a flat in the housing society eight years ago, said he approached many senior officials to get the brick kiln closed but no action was taken. The municipality, the collector’s office and the pollution control board keep passing the buck, he said. When he sought information on the brick kiln through a right to information application, the municipal corporation replied the kiln is operating without any licence. “People are too scared to speak against the brick kiln owner as they fear retribution. But I am determined to get the kiln closed even if it costs me my life,” Sethi said. The authorities of a school, located barely 50 metres from the kiln (see p6, ‘Passing the buck’), refused to comment on the effect of smoke on the students. Some residents who did not want to be named said the builder sourced bricks for construction from the kiln owner and so never showed concern about getting it closed. They said that black soot from the kiln settles on the floor, curtains and furniture in their homes and dusting even twice a day is of no use. They said that the builder was constructing more buildings in the vicinity of the kiln. Pyare Singh Chauhan, secretary of Nyati Enclave housing society, said the municipal corporation has put a road development plan on the backburner because it would entail removing the brick kiln. The kiln, operated by M/s Ghule Patil Vit Karkhana, was asked to close operations by the Maharashtra Pollution Control Board in April this year but it is still operational. Residents said the kiln owner is influential, therefore authorities don’t want to take action against him. Shridhar Vishnu Yewlekar, assistant engineer in Pune municipality’s development planning department, said the kiln owner has been issued notice. “Right now the kiln is not operating. We will wait a month and again visit the site,” he said. But Sethi said the kiln was closed only temporarily due to rains. The general manager of Nyati Builders, V B Kelkar, said the company had no authority to close the kiln.