Outcome in Gazipur not going to affect government’s plan to bring 20,000 ha under the GM crop in next five years 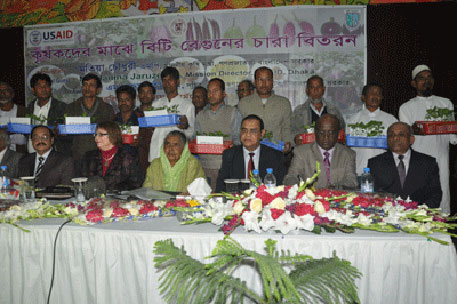 Farmers in Bangladesh's Gazipur district are ruing their fate following Bt brinjal crop failure. The country was the first in South Asia to grow a genetically engineered vegetable and about 20 farmers were selected by the government for the cultivation earlier this year.

Bangladesh Agricultural Research Institute's (BARI) biotechnology director, Al Amin, acknowledged the problem. “It [crop failure] is primarily because of regional soil. Our observation is that the soil is not good for summer brinjal. It’s not that crop has failed entirely but the plants have been affected,” he said. He added that the problem is not being witnessed in the other three districts where the crop is being grown—Rangpur, Pabna and Jamalpur.

The BARI expert, however, was confident that the outcome in Gazipur is not going to affect Bangladesh government’s plan of bringing 20,000 hectares under Bt brinjal in the next five years. The government plans to increase the reach to around 20 districts. “The Bangladesh Agriculture Development Corporation is undertaking seed production and this year’s production is under way,” said Amin. Asked about the commercial price of the seeds, Amin replied, “It’s likely to be same as the normal brinjal seeds or a little more. But the price is not yet decided.” The present brinjal seed prices in Bangladesh are 10 to 20 takas per gram.

On May 7, Bangladesh-based newspaper New Age had reported that Bt brinjal crop in Gazipur was encountering several problems like pest attacks, including shoot borers and that the plants were also not growing properly. The few farmers growing Bt Brinjal in the region, including Masud Sarker in Baraid village of Kaliganj upazila, said they would not grow it anymore. Masud was given 1,100 saplings and extension services by BARI. Another farmer, Haidul Islam in Saitalia village of Sripur upazila has already cleared half of the land following crop failure. He was given 4,000 takas by the government for cultivating the crop. The third farmer, Majibur Rahman’s Bt brinjal plants were found dead. However, a fourth farmer’s plants were found to be fine.

On October 28, last year, Bangladesh’s National Committee on Biosafety (NCB) approved the cultivation of four GM varieties of brinjal—Kajla, Uttara, Nayantara and ISD006. These have a gene from soil bacteria, Bacillus thuringiensis (Bt), which makes them resistant to fruit and shoot borer (FSB). FSB is a common eggplant pest causing destruction to the crop in South Asia. The infused Bt gene in the Bt Brinjal plant disrupts the digestive system of the pest, killing it within three days of ingestion.

Bt Brinjal is a product developed together by Indian-seed giant MAHYCO, and BARI under a funding by the United States Agency for International Development (USAID). It took seven years for Bangladesh to complete greenhouse and open-field trials for Bt brinjal before its final release. The developers claimed that it would reduce losses from FSB by 50 to 70 per cent. Despite repeated attempts, MAHYCO declined to reply to Down to Earth queries.

Bangladesh has around 50,000 hectares under brinjal (eggplant) cultivation with an annual output of 350,000 tonnes. The GM crop developing team had two BARI scientists who visited India is 2005 and were working with MAHYCO researchers in their Indian facility. The National Biosafety Committee of Bangladesh approved confined field trials in 2007-08.