In a bid to combat air pollution, authorities in Italy have banned the use of cars on Sundays 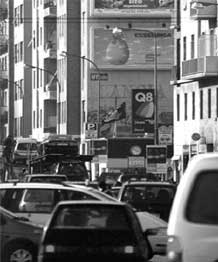 beginning next month, fourteen Italian cities, including Rome, Florence and Milan, will ban cars in the city centre every Sunday in an attempt to reduce smog levels that kill thousands of people every year and destroy ancient monuments. According to a plan announced by the government, all city centres will be sealed and people will be urged to walk or cycle.

Edo Ronchi, the environment minister, has promised more trams, buses and underground trains that will run more frequently on Sundays. Residents will also be encouraged to try more eco-friendly modes of transport, such as electric scooters or cars that run on methane gas. The plan will take effect from February 6.

Many environmental groups have praised the authorities for introducing the plan in a country which has one of the highest car ownership ratios in the world - 32 million cars for 57.5 million people.On the other hand, more than 15,000 Italians die from smog-related diseases each year, according to the World Health Organization.

In Europe, the figure could be more than 80,000. It is estimated that Italy loses around 16 million working days every year because of air pollution-related illnesses, such as bronchitis and asthma attacks. During a trial day without cars last September, carbon monoxide levels in eight cities dropped by an average of 35 per cent.

Legambiente, Italy's leading environmental group, has praised the initiative but said that something should be done to reduce traffic even during the week. Car-free weekends have been mooted for many years but politicians hesitated for fear of angering one of the most car-addicted electorates in the world - formula one racing is a national passion and many Italians are reluctant to walk even short distances.

Rome has banned tour buses from the centre to avert gridlocks caused by more than 20 million pilgrims expected for the Vatican's holy year of 2000. The last concerted attempt to ban vehicles from city centres was during the oil crisis of the early 1970s when the government wanted to conserve petrol. During that period, there was a brief revival of horses and carts.