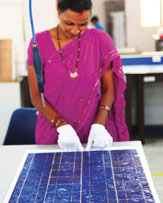 The Union finance ministry, it would seem, has decided not to act on the recommendations of the commerce ministry to impose anti-dumping duties on imported solar cells and modules.

In May this year, the Directorate General of Anti-Dumping & Allied Duties (DGAD) of the Department of Commerce presented its findings on the Anti-Dumping Investigation concerning imports of Solar Cells originating in or exported from Malaysia, China, Chinese Taipei and the US. After an investigation stretching over 18 months, the directorate had recommended imposing a duty of US $0.11 to US $0.81 per watt on cells to help domestic manufacturers compete with the really cheap imports.

The power ministry has been lobbying against the imposition of such duties on solar equipment imports. The power ministry has claimed that the domestic manufacturers do not have adequate capacity to cater to the needs of the Indian solar market. Power Minister Piyush Goyal has earlier commented that the country has solar power equipment manufacturing capacity of 700-800 MW, which is inadequate in meeting the huge plans that the government has in expanding renewable energy sources.

Besides the power ministry, two American senators, Sherrod Brown and Rob Portman, had lobbied with the government earlier, saying that the decision to impose duty on US solar cell and panels would put companies like First Solar at a competitive disadvantage.

Will this result in growth of solar pie?

The BJP-led NDA government has ambitious plans in the solar sector. Minister Goyal had said in a recent meeting that the new government wants to see 5-7 GW of additional solar PV installations per year. As per the power ministry, anti-dumping was a major hurdle in pursuing its ambitious plans in the solar power sector. The minster says the current policy framework and industry strength does not match up to the solar installation targets that the government is keen to achieve.