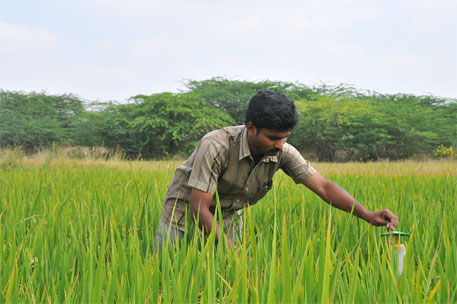 A report by Comptroller and Auditor General (CAG) of India has highlighted several shortcomings in the Rashtriya Krishi Vikas Yojna (RKVY), stating that among 4,061 projects taken up for implementation from 2007-08 to 2012-13, only 2,506 or 62 per cent projects were completed.

The report highlights irregularities at every level of the Central scheme launched to incentivise states to draw up tailor-made agricultural strategies.

According to the CAG report, states reported excess receipt of grant by Rs 4,289.20 crore during the review period. Similarly, states reported an expenditure of Rs 31,916.53 crore whereas the agriculture ministry reported Rs 27,938.52 crore. The ministry took no steps to reconcile the figure of the period.

The programme faced apathy from the administration during implementation in different states.

From 2011 to 2013, when Narendra Modi was chief minister of Gujarat, 17 of a total of 27 scheme components or 63 per cent were not implemented, says the report. This programme was under the Vegetable Initiative for Urban Cluster.

Other states like Uttar Pradesh and Bihar also fared similarly in separate categories. Uttar Pradesh did not provide pump sets to 44 per cent of the total bore well target of 17,143, says the report.

Regarding monitoring of the programme, the audit says that RKVY guidelines do not contain any provision for monitoring of RKVY, apart from one per cent administrative provision.

A major missing link in evaluation was assessment of the effectiveness of the scheme. Audit could not find any benchmark prescribed anywhere to measure the increase in production and productivity.

RKVY was launched to increase agriculture growth rate to four per cent by the end of the 12th Five Year Plan, said the report, adding that there was no mechanism to measure this directly.

RKVY schemes are formulated and monitored by concerned divisions in the agriculture ministry, but implemented by states with more or less 100 per cent Central grant. CAG suggests that the ministry should coordinate with state governments to rectify the deficiencies cited by the audit.