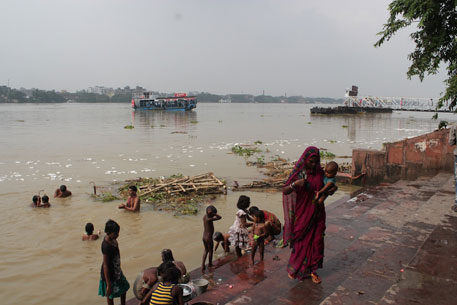 Cleaning the Ganga has been high on the priority list of the Narendra Modi-led government at the Centre. But the affidavit filed recently by the government before the Supreme Court gives no details on how it intends to achieve the task of cleaning India’s national river. This prompted the apex court to rebuke the government and remark that it may not be able to clean the Ganga even in 200 years if it goes by such a plan.

The affidavit (pdf) was filed in the ongoing public interest litigation (PIL)—M C Mehta v Union of India and others—by Solicitor General Ranjit Kumar on behalf of the joint secretary and director of National Mission for Clean Ganga or NMCG (the case is being heard for the past 29 years). According to Supreme Court advocate, Vijay Panjwani, who was present in court during the hearing on September 2, the bench found the affidavit very vague and lacking in content. A close perusal of the affidavit reveals big gaps in the proposed government plan.

The first part of the affidavit talks about Ganga Action Plan (GAP) I and II and how the programme has improved the water quality. To exemplify the impact of the programme, a stretch between Rishikesh in Uttarakhand and Rajmahal in Jharkhand is mentioned. The affidavit notes that within this stretch of 437 km, the problem area is only the Kannauj to Varanasi stretch, where biological oxygen demand (BOD) of the water exceeds the permissible limit of 3 mg/l. The note also assumes that without GAP this stretch would have extended beyond Kannauj and Varanasi where BOD would have exceeded the permissible limit almost three times. The affidavit includes monitoring data of the water quality of the river for the years 1986 (just after the launch of GAP I) and 2012. The monitoring data have been collected from independent institutions, says NMCG. The qualities are represented by BOD and DO (dissolved oxygen) parameters only.

No effect of the GAP programmes on the quality of water can be analysed for West Bengal as only 2012 data are given for two stations—Palta and Uluberia. CPCB’s data show that there has been constant increase in BOD level between 2007 to 2011 at Dakshineshwar and Diamond Harbour, other stations of West Bengal (the values are well beyond the standard value, indicating high pollution which makes the water not even fit for bathing). The data of monitoring stations like Palta and Uluberia according to CPCB’s report show a decreasing trend (well within the standard, indicating that water is fit for bathing) between 2007 and 2011.

Graph: Water quality of Ganga with respect to BOD level 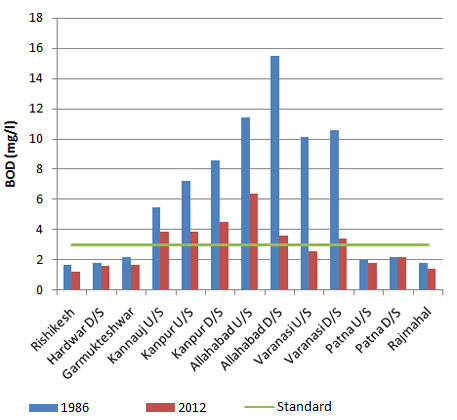 Graph: Water quality of Ganga with respect to DO level 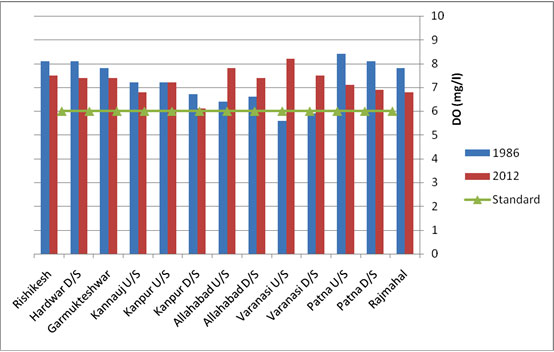 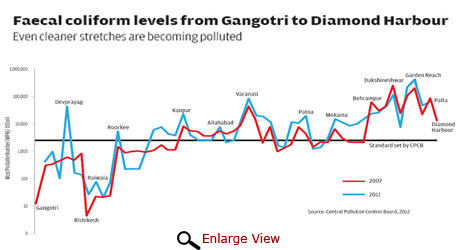 STPs treat only fraction of wastewater

The affidavit says that GAP I and II had created a facility of treating around 1,078 million litres a day (mld) of sewage and 20 mld of industrial effluent along the main stem of the Ganga. CPCB's report published in 2013, however, showed that 51 of 64 sewage treatment plants (STPs) work at 60 per cent of their installed capacity and 30 per cent of the plants are not even in operation. The note nowhere talks about the efficiency of the STPs. 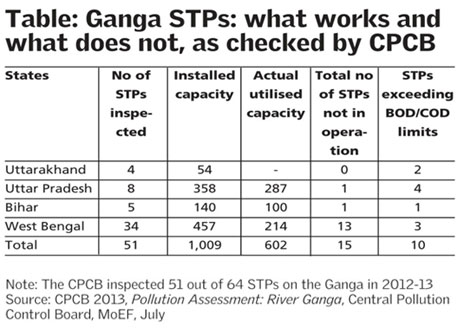 Another point that is completely missing in the report is the amount of sewage that is actually generated in the cities along the river. There is mention of treatment capacity of 1,078 mld (plus 20 mld for industrial waste) under GAP and additional 659.23 mld under National Ganga Basin River Authority (NGBRA). Hence the total amount of sewage treatment capacity that will be created is 1,757.23 mld. CPCB's recent data shows that the actual measured wastewater discharge into the river is 6,087 mld. Hence creation of new facilities will treat only 29 per cent of the waste. Right now the STPs treat only 20 per cent waste, according to CPCB, whereas official records say that the gap between treated and untreated waste is 55 per cent.

The affidavit says that NGBRA programme will create a sewer network of 2,469.53 km of which 475.02 km has been installed. That means between 2009 and 2014, only 19 per cent of sewer work has been completed. That means to make the full stretch, it will take 32 years!

What’s more pollution hot spots like Kanpur, Allahabad and Varanasi still have 71, 78 and 84 per cent of the city outside the sewer network. So it is anybody’s guess how long it would take to bring at least 50 per cent of these cities under sewerage network. Experience shows that it is very difficult to lay underground sewer systems in old and congested cities. That means drains to intercept sewage will not happen very soon in the cities and the river will continue to be polluted.

The action points seem very promising but the activities that will be planned to achieve these objectives are not clear. The document talks about multi-institutional, multi-dimensional and multi-sectoral approach for the achievement of the objectives. It says that a report by group of secretaries for achieving the targets is under review and also a report on the Ganga River Basin Management by consortium of Indian Institute of Technologies (IITs) is under preparation. Both these reports will get completed by the end of this year after which a review will be done again by the states then a plan of action will be finalised. The timeline for the state review and finalisation of plan of action is not mentioned at all.

The affidavit mentions that evaluation of appropriate technologies for cleaning the Ganga has been started by a committee of experts. But there is no elaboration on the timeline of the report or about the members of the committee in this report. NMCG had recently organised "Ganga Manthan", a meet for the different stakeholders, which did not give any concrete result. The document mentions that NMCG wants to take this forward. NMCG called this meeting a 'national dialogue' but the dialogue was missing. The meeting proved to be a business as usual one and a rather politicised one at that.

The legislation to make the Ganga pollution free is in the draft stage, says the affidavit. The draft seems to be promising but how the implementation of this law will take place is not clear. This is because a plethora of Acts to protect the rivers and other waterbodies in India are already in place, but these have failed to save the Ganga. The document gives data that Uttar Pradesh has the highest number of polluting industries and about 90 per cent of the industries inspected by CPCB till date breach existing standards. Hence, what is needed is enforcement of law.

The programme for cleaning Ganga started almost 30 years ago and we are still struggling to find the solution. The government only talks about creating STPs without any estimate of wastewater that is generated. A focussed programme is still missing and the recent affidavit is a clear indication of that.

The Supreme Court has asked the Centre to file a supplementary affidavit giving details of stage-wise plan with definite time frame while adjourning the hearing till September 24. It remains to be seen if the government can present an actionable plan next time.
Web edition Web edition News News News SUPEME COURT Solicitor General … Ganga pollution Ganga Action Plan Down to earth
Donate Now