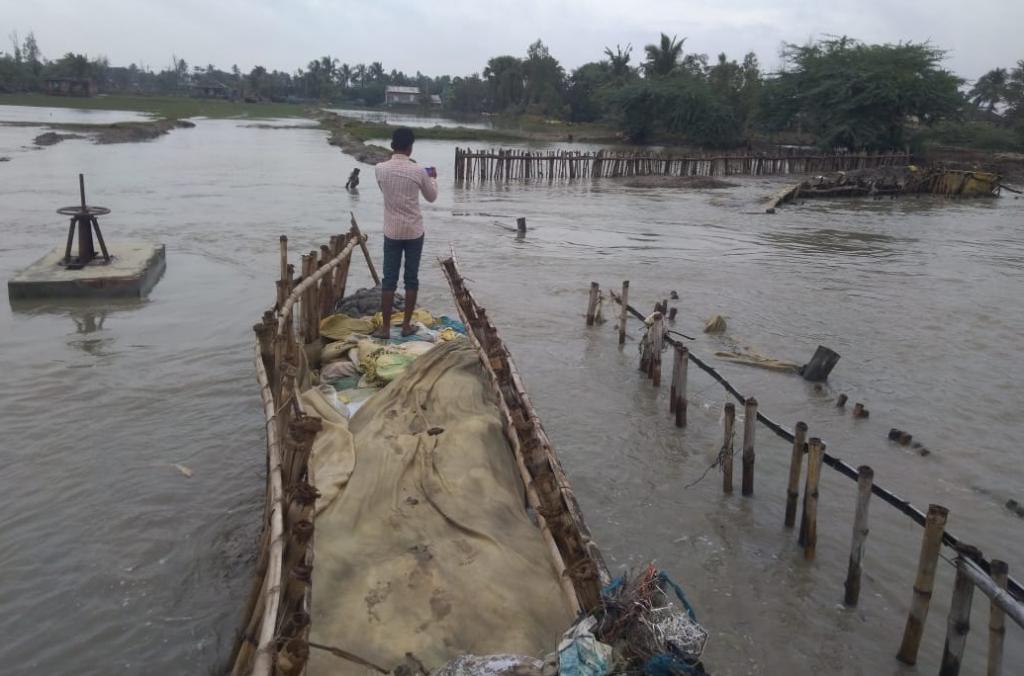 The damaged dyke at Mousuni island in the Sundarbans. Photo: Jayanta Basu

Some 5,000 people had to be shifted to relief camps after the remote Mousuni island in the Sundarbans region flooded due to the collapse of an embankment. This despite the Cyclone Jawad weakening and fizzling out December 5, 2021 without landfall.

A poorly built sluice gate on the Chinai river, near its confluence with the Bay of Bengal, gave away on the morning of December 5 on Mousuni island, locals said.

The sluice gate collapse happened just as the high tide of nearly 18 feet came in even as heavy rain due to Jawad battered the area. “The river and land has become one and will remain so till the embankment is restored,” a local said.

Mousuni is located on the western fringe of the Indian portion of the Sundarbans in West Bengal.

Most of the affected residents have been shifted to the island’s flood shelter and a high school. This, even as saline water continues to make ingress every time a high tide strikes.

Jawad, which was expected to hit Puri district in Odisha on the afternoon of December 5, turned into a deep depression and did not cause the damage it was predicted to.

The depression was predicted to move north-eastwards towards West Bengal, which it did. It reached the Indian Sundarbans on the morning of December 6, with a wind speed of around 40 kilometres per hour.

But its impact had been largely minimised by noon, GK Das, head of the India Meteorological Department (IMD) Kolkata told this reporter December 6 afternoon.

“We do not expect any more damage and are trying to repair the damage already incurred,” an official from local administration said.

However the damage in Mousuni was mainly caused December 5, when the heavy rain due to Jawad and high tide caused part of a newly built embankment to give way.

“About 50 metres of the embankment near the confluence of the Chinai river with Bay of Bengal has been damaged in the Baliara mouza due to combination of Jawad’s impact as well as high tide,” Santanu Sinha Roy, the block development officer of Namkhana block, where Mousuni is located, said.

A mouza is a type of administrative district, corresponding to a specific land area within which there may be one or more settlements.

Locals said a smaller embankment was also breached in the Koylagheri area of the Mousuni mouza, which triggered inundation.

The residents attributed the embankment breach to poor construction design.

“There must have been a fault in the construction. It needs to be investigated. If the embankment were strong, the suffering of the people could have beeen minimised,” Sahadeb Maity, a local, said.

Sinha Roy admitted that “there is an issue with the sluice gate” but assured that the irrigation department had already started repair work. “The embankment that has given way, was already weak,” he said.

An official from the irrigation department said the breach would be fixed within two weeks. Another official claimed that “damage could be minimised as tourists have not been allowed in Mousuni as a precaution to Jawad”.

Innumerable hotels have come up in the Baliara mouza near the Mousuni beach, flouting environmental norms, in recent years. This is close to the area where the embankment has been breached.

Mousuni, sandwiched between Gangasagar and Bakkhali, is one of the most vulnerable islands in the Sundarbans. It is often showcased as a benchmark of increasing climate impact in the Sundarbans area.

The Sundarbans are also topographically positioned below sea level and need embankments to prevent high tides from making ingress into settlements.

This reporter spoke to a range of people across the Sundarbans and found that smaller breaches or overtopping of embankments had occurred in various places on Sagar island, Kakdwip, Kumirmari island of Gosaba block and also on the embankment of the Goureshwar river in Hingalgunge.

“We have shifted about 25,000 people to safer places,” P Ulganathan, district magistrate of South 24 Parganas, said.

Mousuni, consisting of four mouzas, has been severely affected in the last two years by repeated cyclones — from Bulbul to Amphan and then Yaas. Jawad has affected two of the four mouzas.

Mousuni has lost about a sixth of its 28 square kilometre area to the rising sea in the past 50 years, according to studies done by the oceanography department of Jadavpur University, Kolkata.

This, even as the population has increased two-and-a-half times.

“The rate of relative sea level rise is about 8-12 millimetres per year, as measured at Sagar island adjacent to Mousuni. This is three to four times more than the global average,” Sugata Hazra of the oceanography department, said.

“Disaster-prone areas like Mousuni are almost like punch bags,” Sanjay Vashist, director of Climate Action Network, South Asia, said. “They keep taking punches and often don’t get the chance to recover,” he added.

Cyclones Amphan, Bulbul and Aila, all made landfall within 25 km of Mousuni, according to IMD. “It’s an extremely rare event and underlines the acute vulnerability of the area,” Anurag Danda, environment expert from WWF India, said.

Mousuni’s Panchayat has found that 93 per cent of the 6,500-odd families on the island and 80 per cent of houses were affected multiple times in the last two years.

Displacement has become routine in Mousuni, even for the dead. “This is my fourth house during the last one decade. Even the land used to bury the dead has not been spared,” Muslima Bibi of Baliara, said.

“Over 1,500 families have been displaced from vulnerable pockets of Baliara, Kusumtala and Bagdanga in the past 15 years, many of them, multiple times,” an elderly resident said.

Many parts of the island are still without embankments despite residents having appealed for them.

“The embankment has still not been built. The Baliara mauza is flooded with rising seawater every year. The Kusumtala and Bagdanga mauzas are sinking, as well as part of the Mousuni mauza,” a group of residents wrote to Mamata Banerjee, chief minister of West Bengal, sometime back.

About 17 km of the 29 kilometres of embankment around Mousuni were either non-existent or highly vulnerable, locals said.

“Though the state government is doing what it can, we need national and international support to at least partially make repair the damages the Sundarbans have suffered as a result of changing climate,” Javed Ahmed Khan, West Bengal’s minister-in-charge of disaster management, said.

“Despite facing severe and repeated climate impacts over the last many years, the vulnerability of people living in Mousuni and elsewhere in the Sundarbans has not yet been recognised. We need to push for more support for the affected people through the international mechanism,” Harjeet Singh, senior advisor of Climate Action Network International, said.