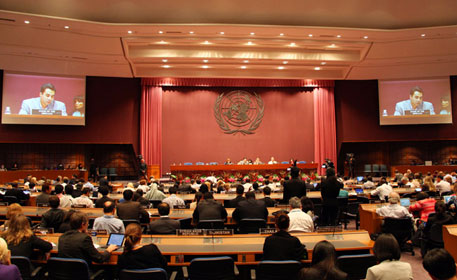 With just a day left for the informal negotiating session on climate change in Bangkok to conclude, the chair of the Ad hoc Working Group on Long-term Cooperative Action (AWG-LCA), Aysar Tayeb of Saudi Arabia, expressed dismay at the progress made so far.

AWG-LCA, which was mandated to cease functioning by the end of the year at Doha, is one of the three tracks under which negotiations are on and has a slew of elements under it. These elements, which were agreed to under the Bali Action Plan five years ago, include finance and technology transfer, which have proved to be contentious since the time of their conception. For developed country parties that are reluctant to show any promise of extending financial or other means of support to developing country parties, the time constraints that such a significant task poses has served as the perfect excuse to “jump ship” (abandon LCA), a trend that has been gathering momentum here at Bangkok. They have been urging to either shut the door on certain elements or shift them to either the ADP negotiation track (Ad hoc Working Group on the Durban Platform for Enhanced Action) under which the post-2020 agreement will be finalised or to the subsidiary groups that primarily deliver on technical issues.

At a stocktaking session of AWG-LCA convened on Tuesday, Franz Perez, delegate from Switzerland, said: “Implementation of the Convention is a continuous process that cannot be finished in a certain amount of time.” Elaborating on the successful outcomes from LCA, he said, “Thanks to its outcomes, we have mitigation pledges by 87 countries which cover around 80 per cent of emissions...any uncertainty that LCA will not complete its work in Doha is not welcome. After Doha, will be the time to let the new institutions do the work.”

The delegate from Australia (representing the Umbrella group) followed the same line of positioning, pointing to the high level of progress that was already achieved through LCA: “the tables captured significant progress so far on many elements, including adaptation, finance, technology transfer and capacity building.” Referring to the institutional mechanisms such as the Green Climate Fund, Adaptation Committee and the Technology Executive Committee (TEC), he said, “permanent homes for many elements is no small work... in summary, the LCA will not be extended beyond Doha; there is a shared understanding to continue work in spin off groups and they deserve priority of work in Doha.”

While many developing country parties identified the closure of LCA as a key element for a successful, balanced package at Doha at a meeting convened by the incoming CoP presidency, they are extremely concerned about developed country parties wanting to transfer the elements from LCA to other bodies. They take this to be a signal of the developed countries defaulting on their promises on key elements such as finance and technology transfer.

According to the delegate from Philippines, “there has been no convergence of views on exactly what we are going to do in Doha. For us an agreed outcome means we have fulfilled the mandates of the Bali Action Plan. Developed countries are refusing to show any progress on means of implementation (which) is crucial to move forward to any other platform. It (developed country parties) wants a closure of all the new elements. All this new work has been placed on developing countries without any clarity on how they will be implemented.” She also lamented about how the developed country parties were not willing to put forward a negotiating text which would provided the much needed direction and focus to move things forward.

The Philippines has been the voice of a group of countries here that have loosely come together and called themselves the Like-minded Group. This is a sub-group within G77+China that is vociferous on issues such as equity and common but differentiated responsibilities (CBDR). This group includes countries such as India, China, Arab group of countries, emerging economies such as Malaysia and Thailand and a group of Latin American countries, including Bolivia and Venezuela. Although in informal group, they have been growing in size and have been noted as a potentially powerful coalition.

Colombia, also a developing country party and member of the G77 and China, on the other hand, supports the closure of LCA. According to the delegate from Colombia, “closing LCA does not mean we are closing down on substantive issues. It is an acknowledgment of how far we have come and how much we have achieved. Now we need to focus on how to move to post-LCA.”

Amit Narang, representing the Indian delegation, spoke towards the end to note that he had made a note of the divergent views that were being expressed in the room. He opted to clarify on the mandate that Durban had given to the ministers of all parties. He said: “LCA was extended for a year for us to do something, not to close it.” He further noted: “We can foresee that we may not be able to finish all the work. We must start identifying the technical and political issues and how to and where to take these issues.” He identified “long-term global goal, peaking year, review, long-term finance, equity, unilateral measures and technology patents” as key concerns for India to have a successful outcome in Doha.

With parties falling short of the needed agreement and clarity to move forward on issues under the LCA, the closure of the LCA is expected to be a recipe for disaster at Doha.