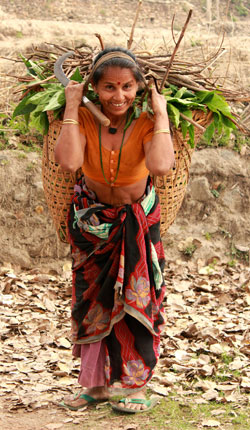 Indigenous people, local communities and private smallholders own or manage about 30 per cent of the world’s forests. Unfortunately, their vital role in tackling deforestation and reducing poverty is often overlooked by governments, say two new publications released by the Food and Agriculture Organization of the UN (FAO) and a group of its partners on June 30.

A crucial constraint is their isolation from each other, from markets, information, business services, policymakers, financing and investment opportunities, acknowledges the reports, which argue that a better policy environment, coupled with targeted support to help the small-scale forest and farm producers organise could turn this situation around.

“Coming together of forest and farm producer organisations can help overcome their isolation as well as other constraints such as a lack of secure forest tenure and financial and business development instruments,” says Jeffrey Campbell, FAO Forestry Officer. “They must compete with large-scale businesses that often receive preferential treatment, access to markets, financing and resources.”

In a press release issued by FAO, Chris Buss, Deputy Director of IUCN’s Forest and Climate Change Programme, highlights the role of small-scale forest producers in global trade and says, “It is crucial to ensure forest producer organisations are strengthened and empowered if we are to scale up efforts in order to achieve goals such as Bonn Challenge to restore 150 million hectares of degraded and deforested lands by 2020, which will in turn contribute to delivery on international climate, biodiversity and development targets.”

Given the track record of deforestation and degradation in state-controlled forests, the reports say, there are good arguments for increasing the percentage of rights held by communities to forests.

The reports highlight experiences of countries that have encouraged forest and farm producer organisations and benefitted from them. For nearly 100 years, Nordic countries have been showing that efforts to protect and strengthen forest environmental services and improve livelihoods can be mutually reinforcing. In Nepal, FECOFUN, a network of forest user groups was formed in 1995 to give voice to small forest users in policy processes and has grown into a social movement of 8.5 million local producers. In Mexico, where people manage more than 80 per cent of forests, such organisations play a vital role in fighting poverty in rural areas.

The policy papers, prepared by The Forest and Farm Facility (FFF), a partnership between FAO, the International Institute for Environment and Development (IIED) and the International Union for Conservation of Nature (IUCN), recommend six measures to develop effective forest producer organizations and improve livelihood of forest dependent people. These include developing incentive mechanism to strengthen locally controlled forestry and facilitating networking among forest and farm organisations; creating supportive legal frameworks and removing regulatory barriers; protecting forest tenure rights of indigenous people, local communities; providing forest and farm organisations and their members with greater access to financial services, such as affordable credit and insurance; connecting forest smallholders to markets and services, including negotiation of fair market prices and provision of real-time market information; and building a worldwide coalition of forest and farm producer organizations to influence policymaking and generate momentum for greater support.

Report: Governing the forests: an institutional analysis of REDD+ and community forest management in Asia