Countries put forward their expectations of the Peru climate summit 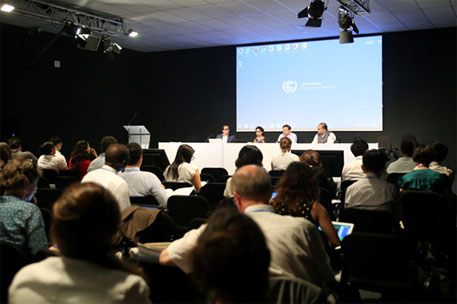 The first day of the Peru climate change conference saw representatives of different groups present their agenda and expectations of the 2015 agreement and the role of the Peru summit therein.

South Africa, for example, which represents the BASIC group (Brazil, South Africa, India and China), highlighted the elaboration of elements of the new climate agreement, identification of information related to Intended Nationally Determined Contributions (INDCs) which are driven by domestic circumstances, and raising of the pre-2020 ambition.

Like the Arab group, the BASIC group also remarked that all elements of the Durban Platform for Enhanced Action must find mention in the new climate agreement. It pressed for equity and common but differentiated responsibility and respective capabilities (CBDRRC) in the new agreement.

Cuba, as a representative of like-minded developing countries (LMDCs), said that any change in the draft negotiating text must be based on consensus. It expressed its concern that developed countries are reluctant to ratify the second commitment period of the Kyoto Protocol. It reiterated that the principles of CBDRRC should also form the basis of the new agreement.

Developed countries like the US and the EU pressed for dilution of annexes which give differential treatment to countries in terms of their responsibility to curb climate action. They stressed REDD plus mechanisms (to conserve forests) and market mechanisms to address climate change while recognising that adaptation needs more focus than before.

The G-77 and China group insisted on the support of finance and technology transfer from developed to developing countries. Like the BASIC group, it demanded that the principles of the convention are reflected in the new agreement.

Saudi Arabia, on behalf of the Arab group, voiced its concerns about the working process of the Ad-hoc Working Group on Durban Platform for Enhanced Action (ADP), saying the ADP had not made any significant breakthrough and hence, considerable changes were required in its working process. The group supports and fully associates itself with the setting up of committees to deal with the six elements of the ADP individually—mitigation, adaptation, finance, technology transfer, capacity building and means of implementation. The Arab group also firmly emphasised that the new climate agreement must be based on principles of CBDRRC. They said adaptation and mitigation must be approached in a balanced manner. According to them, there should also be a mechanism for verification of support from developed countries to developing nations.

Several civil society organisations also presented their positions. Lebanon-based Climate Action Network (CAN) said that the decision text on INDCs must include an ex-ante assessment and an ex-post review, which should involve civil society members. It also said there was an urgent need to phase out fossil fuels by 2050. Belgium-based Climate Justice Network stressed more on adaptation and loss and damage in the new climate agreement. Women and Gender Constituency urged parties to formulate a new agreement based on gender equality and respect for indigenous rights. Youth NGOs made an emotional appeal for INDCs to have health benefits and pressed for zero emissions by 2050. All NGOs demanded transparency in negotiations and equity in participation.