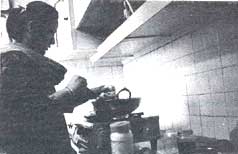 AS IF science isn't perplexing enough to most people, here's a technology that believes not in removing hurdles but putting them up. Fortunately, "hurdle technology" seeks not to confound reason but tries to hamper the growth of bacteria and fungi whose company spoils food and, like other technologies, is aimed at serving humans.

A food preservation technology developed by a German scientist in the early '70s, hurdle technology is now being adapted for use in India. G R Patil and Jayaraj Rao at the Karnal-based National Dairy Research Institute are working on several aspects of the technology that enables the preservation of cooked or semi-cooked foods over long periods at room temperatures, without altering their quality substantially. The NDRI scientists have succeeded in storing paneer or Indian cottage cheese, at room temperature for 20 days by merely adding a small amount of salt to it.

Although previously bacterial and mould growth in foods has been checked through chilling, freezing, irradiation, heating, drying, acidifying and even fermenting, these techniques alter the quality of the food. Maintaining such basic charactersitics of the food like the hardness, chewiness, its feel in the mouth, taste and nutritive value is often incompatible with efforts to enhance shelf life, say the scientists.

But the principle behind hurdle technology is to make conditions inhospitable for the growth of food-spoiling microorganisms. This is done using a combination of preservation techniques such as increasing the acidity, drying, adding preservatives, air-tight sealing or mild heating in a way that the food product retains its original flavour and quality. These "hurdles" can be mathematically manipulated to ensure the desired keeping quality of the food.

Scientists have found that except for a few microorganisims such as Pseudomonas and coliform bacteria, most microbes cannot survive at a water activity below 0.95. Bringing down the water activity to 0.90 assures the elimination of 95 per cent of bacteria.Patil and Jayaraj have derived substances from pumpkin and papaya extracts that can reduce the water activity of foods and these are likely to find increasing application as this technology is more widely used.