How Chinese foam manufacturers are undermining the Montreal Protocol

To save on the higher cost of alternatives, Chinese foam manufacturers are using banned chlorofluorocarbons that are considered more potent than carbon dioxide in causing global warming 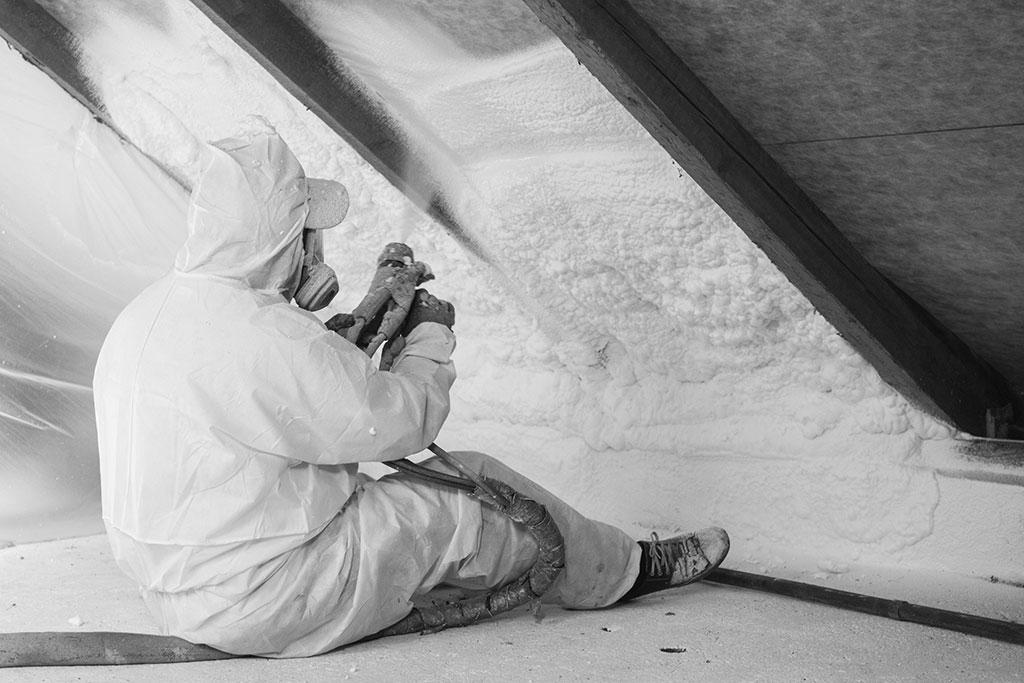 A probe by Environmental Investigation Agency, the UK-based non-profit, has found that Chinese foam manufacturing companies still use the banned CFC-11

There were cheers of jubilation among the international community in January this year when US space agency NASA reported a decline in ozone-depleting substances (ODS), specifically chlorine, since 2005. “We see very clearly that chlorine from chlorofluorocarbons (CFCS) is going down in the ozone hole, and that less ozone depletion is occurring because of it,” said NASA. CFCS are chemical compounds that eventually rise into the stratosphere and stay there for a long time before being broken apart by the Sun’s ultraviolet radiation and releasing chlorine atoms that go on to destroy ozone molecules. Stratosph eric ozone protects life on the planet by absorbing these ultraviolet radiation, which can cause skin cancer and cataracts, suppress immune systems and damage plants. The success was attributed to the Montreal Protocol, a global treaty signed in 1987, to protect the ozone layer from depletion. Under it, the production and consumption of all CFCS officially ended in developed countries in 1996 and in developing countries by 2010 (see ‘On the path...’).

But the euphoria did not last long. Within a few months, in May, research published in scientific journal Nature found a significant rise of 25 per cent in the emissions of a banned ODS, CFC-11 or trichlorofluoromethane, between 2012 and 2016. CFC-11 not only has high potential for ozone depletion, it is also considered 4,750 times more potent than carbon dioxide in causing global warming.

While there can be multiple reasons behind the rising emissions of CFC-11, the Nature study prompted the UK-based non-profit, Environmental Investigation Agency (EIA), to probe into the matter. In July, it found that China’s foam making industry was illegally using CFC-11 as a blowing agent. Since CFC-11 is cheap, compared to other alternatives, the industry uses it to manufacture polyurethane foam or PU foam, which is widely used as an insulation material in buildings as well as in refrigerators, freezers, coolers and heaters.

For over four decades, the ozone hole has steadily appeared every year. However, at a time when it is finally beginning to show signs of healing, EIA’s probe has startled the inter-national community. 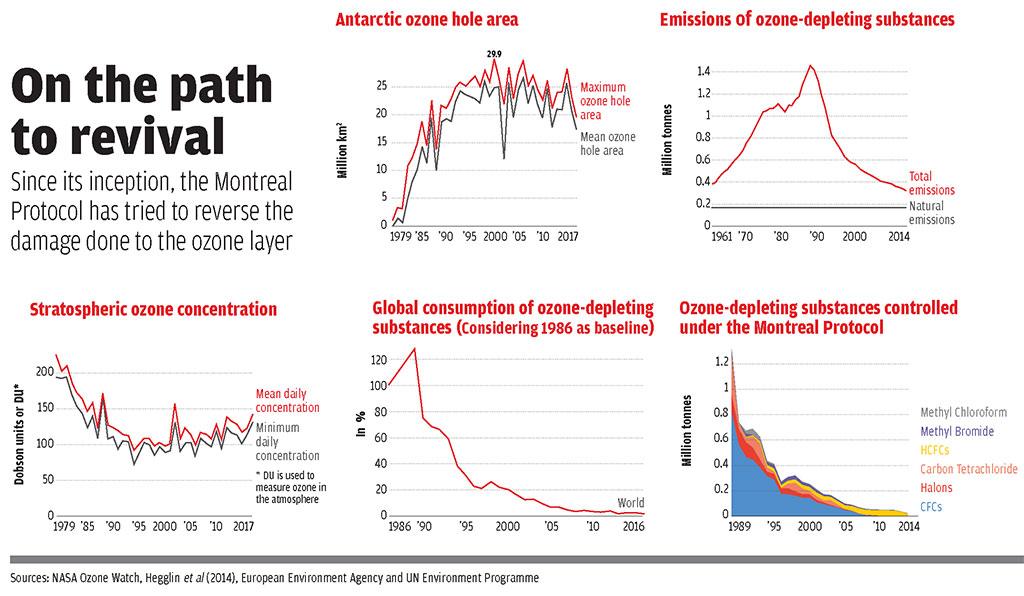 The sudden peak in emissions over the four-year period, despite the ban of CFCS, shows laxity in environmental regulations in China, home to over one-third of the global foam industry. According to the Executive Committee of the Montreal Protocol’s Multilateral Fund, there are over 3,500 foam-manufacturing units in China.

As part of its probe, the EIA surveyed 21 Chinese foam manufacturers and found that 18 were using CFC-11 illegally to save on the higher cost of alternatives, such as hydrochloro- fluorocarbons like HCFC-141b, which is to be phased out in China by 2026.

This is not the first time China has been implicated in illegal production, consumption and trade of banned ODS. Earlier, investigations by EIA and the United Nations Environment Programme between 2009 and 2013 found that ODS constituted the 12th largest global black market, accounting for US $67.7 million in 2011. Since then, trends in gases being illegally produced and smuggled have changed as the world enters the phase-out period for HCFCS. A 2016 update by EIA on illegal smuggling networks found that while illicit trade of CFCs had reduced, it was replaced in the black market by HCFCS. In 2014, a discrepancy of nearly 30 per cent existed in the supply chain of HCFC-22 or chlorodifluoromethane as compa red to the export quantities reported by China. The country is responsible for about 70 per cent of the global HCFC production and more than 50 per cent of the consumption.

Remarking on the situation, EIA climate campaign leader, Clare Perry, admits that it is extremely difficult to estimate the extent of illegal ODS trade. “Much more needs to be done by the Parties to address the issue. Current data is inadequate, many don’t report illegal ODS findings and most do not give adequate resources to customs and other enforcement officials for adequate monitoring. I hope that the recent CFC-11 issue will act as a wake up call to the Parties, who will advocate stronger measures,” Perry says (see interview ‘Continued emissions...’).

Experts say for an aspiring nation like China balancing the economy and the environment is often a tricky matter. As the Chinese economy flourished in the past three decades, it suffered massive ecological damage. At present, the Asian giant is the world’s largest emitter of greenhouse gases and faces multiple challenges in tackling pollution related to air, water and soil. Environmental degradation costs it anywhere between 3 and 10 per cent of its Gross National Income, says American think tank Council on Foreign Relations. Millions of premature deaths and increasing burden of illnesses such as cancer have prompted China to tighten environ mental regulations. Since 2015, the country has strengthened its existing environmental protection mechanisms by bringing in new laws.

Amid international scrutiny, China has revamped its Ministry of Ecology and Environment (MEE) to address non-adherance to green regulations. Harsh penalties for environmental degradation and the imposition of taxes on polluting industrial units have been introduced under a 10-year environmental policy. It also pledged biennial inspections of erring indus tries. Till the beginning of the year, it had penalised over 30,000 compa nies and 6,000 officials.

For a country trying to rectify its reputation as a serial environmental offender, the latest EIA investigation is nothing short of an embarrassment for the government. To drive home the recent prioritisation of environmental protection, the Chinese government acted swiftly after the EIA revelations. Within days of publication of the EIA report, China announced the creation of a special task force to deal with violators and vowed to track down the source of illegal CFC-11.

A spokesperson of the MEE issued a statement saying that China has always regarded legal enforcement regarding ODS as an important part of its daily enforcement. “This special action is a wide-ranging one in recent years. The purpose is to find and combat illegal activities involving ODS, especially CFC-11, and ensure compli ance results.” In this case, additional resources are to be spent on identifying the sources of the illegal gas, the government confirms.

While China promises to make every effort possible to stamp out this latest controversy over the illicit use of CFC-11, the spotlight is back on the Montreal Protocol and its effectiveness in dealing with the prevention of ozone depletion. The Protocol requires sustained political will and increased financial support to developing countries to ensure that they meet the future challenges in eliminating ODS.

The rise in CFC-11 in the atmos phere rattled delegates during the 40th meeting of the Open-Ended Working Group of the Parties to the Montreal Protocol that met in Vienna, just a week after EIA’s investigation became public. The meeting opened with words of caution against complacency and a call for renewed vigour in implementing the Protocol. “It is in these moments that the mechanisms of the international community are more valuable than ever. We cannot relax our vigilance for a second. Any illegal consumption and production of CFC-11 demands decisive action,” Executive Secretary of the Ozone Secretariat, Tina Birmpili, said.

(Ths article was first published in the 16-30th September issue of Down To Earth under the headline 'Hole in the sky?').