The decision is against the earlier orders of National Green Tribunal 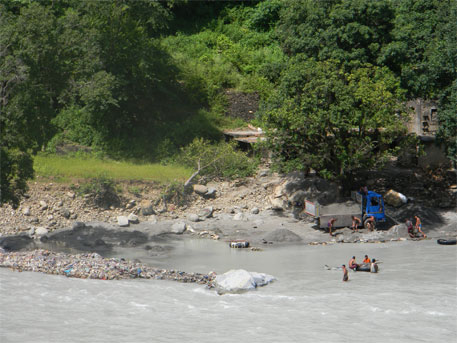 The memorandum contradicts an OM issued by the ministry in May last year, that noted that all mining projects of minor minerals irrespective of the size of their leases would require an EC. Such mining of minor minerals included river bed sand mining. The May OM of MoEF was issued in wake of a Supreme Court order of February 2012 that noted that “leases of minor mineral, including their renewal for an area of less than five hectares, be granted by the states/Union Territories only after getting environmental clearance from the MoEF” (see MoEF's clearance must for mining minor minerals, too: Supreme Court). A ministry official admits that the memorandum is controversial and goes against the Supreme Court order of February 2012.

The latest OM also stands in contravention to the National Green Tribunal (NGT) order of August 5 this year that makes environmental clearances mandatory for all riverbed sand mining projects irrespective of the mine lease area. “Doing away with the five ha provision is a questionable move by the authority as it a disregard of the NGT order,” says Rahul Chowdhury, a lawyer who deals with sand mining cases at the tribunal.

The memorandum, however, has upheld the 2012 Supreme Court’s decision to restrict the depth of river sand mining to three meters and have a safety zone when mining activity is carried out in an area close to a bridge or an embankment. This in a way is a saving grace as until now there was no specific condition outlined by the environment ministry for sand mining activities. Such specification can help to prevent channel shifts in the river or stream bed or prevent erosion along the banks that are typically caused by the excavation of river bed sand.

The memorandum issued last week has categorized riverbed sand mining projects on the basis of their lease area under the Environment Impact Assessment (EIA) notification. Until now, the EIA Notification 2006 and its subsequent amendments have placed all sand mining projects with lease areas between 5 and 50 ha under category B and those with areas equal to or over 50 ha under category A. No regulatory provisions were outlined for mine-leases below 5 ha in the notifications. The Notification had further divided category B into B1 and B2, but no specifications were given about which projects will fall under B1 or B2. The task of classifying into B1 and B2 was generally left to State level Expert Appraisal Committee depending on their environmental impact of the project.

As per the EIA Notification, all category A projects are required to carry out an environment impact assessment (EIA) and undertake a public consultation before being granted an EC by the Union Ministry.  Projects under category B1 also require an EIA but those falling under B2 are exempted from requirements of both EIA and public consultation. Category B projects are given a clearance by the State Environmental Impact Assessment Authority.

The recent MoEF memorandum has said river sand mining projects with lease areas that are equal or are greater than five ha, but less than 25 ha will fall under B2. This means that such projects by default will neither require an EIA nor a public consultation.  In cases where the periphery of one mining lease area is less than one kilometer from the periphery of another lease area, and the total area covered by these mine-leases equals or exceeds 25 ha, they will become a cluster and the project will come under B1 category.

Besides riverbed mining, the memorandum also provides specifications for other minor mineral mining projects that will be sub-categorised as B1 and B2. It says all minor mineral mining projects with a mining lease area less than 25 ha will fall under B2. Specifications have also been outlined for thermal power plants, cement plants, chlor alkali units, metallurgical industries, chemical fertilizers etc. that are to be categorised as B1 and B2.