Mother of three has been sitting outside Kerala’s state secretariat since August 2; her children attend school from protest site and sleep on the pavement with her 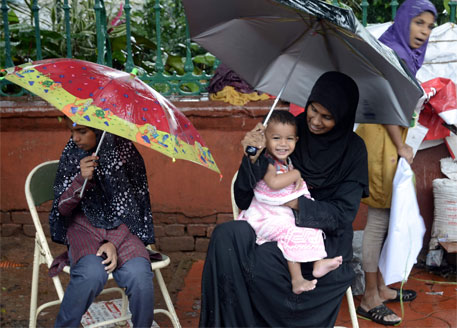 October 2, Gandhi Jayanthi was a national holiday. But it was a busy day for Jazeera. This thirty-one year old mother, with her infant son Mohammed in hand and her little daughters Rizwana and Shifana on her side, was busy receiving visitors. Not at their home but in front of the north gate of the state secretariat in Thiruvananthapuram, Kerala's capital. They have been carrying on with a silent, non-violent, sit-in protest here for the past two months, demanding stopping of coastal sand mining in their village.

Jazeera, a resident of Madayi gram panchayat in Kerala’s northern district of Kannur, started her protest in front of the secretariat on August 2 this year. It was after holding many protests for one- and- a- half –years in her home district against the strong sand mafia that she shifted her agitation to state capital about 500 kilometres away

Green tribunal’s order has no effect

Even after the National Green Tribunal’s ban on coastal sand mining in Kerala and Tamil Nadu on August 16, Jazeera did not wind up her protest. “Because beach sand mining is still going on in many places including my district,” she says. “Ban and court orders are often flouted. Don’t the Coastal Regulation Zone rules ban activities that affect the coast adversely? But are they followed properly?” she asks.  Besides, the state government has not issued any order regarding this, she points out.

On August 5, three days after she started the protest, Kerala chief minister Oommen Chandy had called Jazeera into his office chamber and had assured her that he would take necessary action against beach sand mining. Jazeera felt verbal assurance was not enough. She had given a submission in writing to the chief minister, and she wanted to get some assurance in writing. “After that nothing happened. The state government seems to ignore my protest,” says she.

In the past two months, many politicians from the ruling Congress-led United Democratic Front (UDF) as well as  the CPI(M)-led opposition, the Left Democratic Front (LDF), have visited Jazeera. Some of them have even offered her that they would act as mediators and help her to reach a compromise with the government. “I’m here not for compromises. The issue should be resolved forever,” she says.

According to her, even those politicians who have offered her help are not ready to act against coastal sand mining because local people and migrant labourers are employed by the mafia. Any action against mining will invite the ire of the locals. She had experienced it by herself. Hundreds of local people had taken out a rally against her while she was on protest in her district.  “It’s true that many are employed in this business.  But how long will this livelihood last? What will they do when coastal sand gets exhausted?” she asks. It’s a natural resource that nobody can generate and needs to be passed on to the next generation, says Jazeera.

Jazeera is sad that even people’s representatives support sand mining. Recently, A P Abdullakutty, a member of the Legislative Assembly (MLA) from Indian National Congress representing Kannur constituency wrote in Mathrubhumi weekly against Jazeera’s struggle. “Sand scarcity is a global crisis. The world is looking for alternatives. A way out is taking sand from sea…After Jazeera’s struggle  a police aid post has been established on the seashore in Kannur…Now people are buying sand brought in ships from Cambodia, paying high prices…Mother Sea has been giving fish and sand free ever since human habitation emerged on this earth,” he wrote. “It seems he knows nothing about the existing laws and rules and changes and damage happening to the coast,” says Jazeera.  She has written a strong reply to him in the same magazine. (Abdullakutty was a CPI (M)  Lok Sabha member from 1999-2009. In 2009 he was expelled from the party for praising Narendra Modi’s Gujarat development model. He then joined Congress)

The fact that she is having visitors daily, even students, and they express solidarity, makes her happy.  "Some women tell me that my agitation has given them courage and strength to raise their voices against social and environmental issues in their part of the world," says Jazeera. Environmental activists and some other organisations are giving them continuous support. The media too, she adds. "But the media have many other issues. They cannot continuously cover my protest." She had a live channel discussion with Abdullakutty recently on a regional television channel.

To make sure that her daughters’ studies are not affected by the agitation, Jazeera has got Rizwana (12) and Shifana (10) transferred from their school in Kannur and admitted them in a government school in Thiruvananthapuram. The girls leave for school from the protest site on the pavement and join their mother in the evening. They sleep on a cot put on the pavement. They take bath from a pay-and-use bathroom nearby. “We have to pay Rs 10 every time we use the bathroom. We have food in hotels and use toilets there,” says Jazeera. The family depends on the support extended by well-wishers.

“I don’t worry about my daughters since they are old enough to understand the seriousness of the struggle,” says Jazeera. But she is indeed concerned about her one-and-a half year old son. Her voice cracks when she says how she is managing him and pampering him sitting on the pavement.

How long she is going to continue like this when the government is turning a blind eye to her struggle?  “I don’t know,” says Jazeera. “Many ask me whether I will succeed in this struggle. I have succeeded in bringing the issue into limelight. We’re suffering not for our family’s sake. We’re taking the protest forward and protecting the natural resources is everybody’s responsibility.”