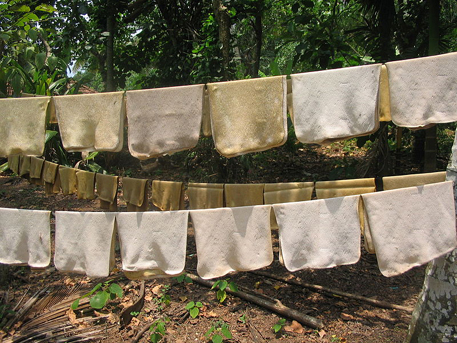 Plunging of Brent crude oil prices to a four-year low at $88 a barrel in the global market might further push down the prices of natural rubber. This is likely to worsen the crisis in natural rubber production sector in the country.

“SR and NR prices are moving in tandem. Fluctuations in SR prices will impact NR prices,” said James Jacob, director, Rubber Research Institute of India, located in Kottayam, Kerala.
Rubber prices in the world market is highly volatile and can be influenced by many factors like weather, currency exchange, supply and consumption, policy changes in the major consuming countries and speculative forces and crude oil prices, he added.

India, the fifth largest producer of natural rubber, has 1.2 million growers, of which barring 537 big plantation having more than 10 hectare area, all others are small growers with a landholding of 0.55 hectares or less. The sector is in deep crisis due to steep fall in the production of domestic and global natural rubber.  The domestic prices for the RSS-4 variety (ribbed, smoked sheet), the preferred variety produced in the country, has fallen from Rs 208 in 2011 to Rs 121 in October 2014. In India, natural rubber and synthetic rubber is consumed in a 70:30 ratio.

The natural rubber price fall has hit Kerala the hardest. Kerala accounts for 83 per cent of the country’s total natural rubber production. The state has more than one million growers. In the wake of the falling prices, many cultivators have left their rubber trees untapped.

Meanwhile, a jumbo team of eight ministers led by Kerala chief minister Oommen Chandy and finance minister, K M Mani, met Prime Minsiter Narendra Modi and other cabinet ministers. The team has submitted a memorandum appealing to the Central government to restrict the indiscriminate import of natural rubber to India.

In the wake of the crisis in the natural rubber sector, the commerce ministry has appointed a committee in June this year to study the sector in detail and come up with a national rubber policy. The committee headed by Rajani Ranjan Rashmi, additional secretary (plantations), is in the process of meeting all the stakeholders.

In India, at present SR is produced by Indian Oil Corporation, a public sector major. The company has started SBR at Panipat refinery since December last year. The company's annual production capacity is 120,000 tonnes which is going to be enhanced to 220,000 tonnes in the next two years. Reliance Industries is the other major company which is going to produce SR in the country. Reliance will start production in 2015 at its integrated petrochemical site in Jamnagar. The plant plans to produce 100,000 tonnes of butyl rubber per year.