What Gandhi teaches the millennials on food and fitness

The cornerstone of Mahatma Gandhi’s attitude towards food was simplicity; food for him was energy and medicine 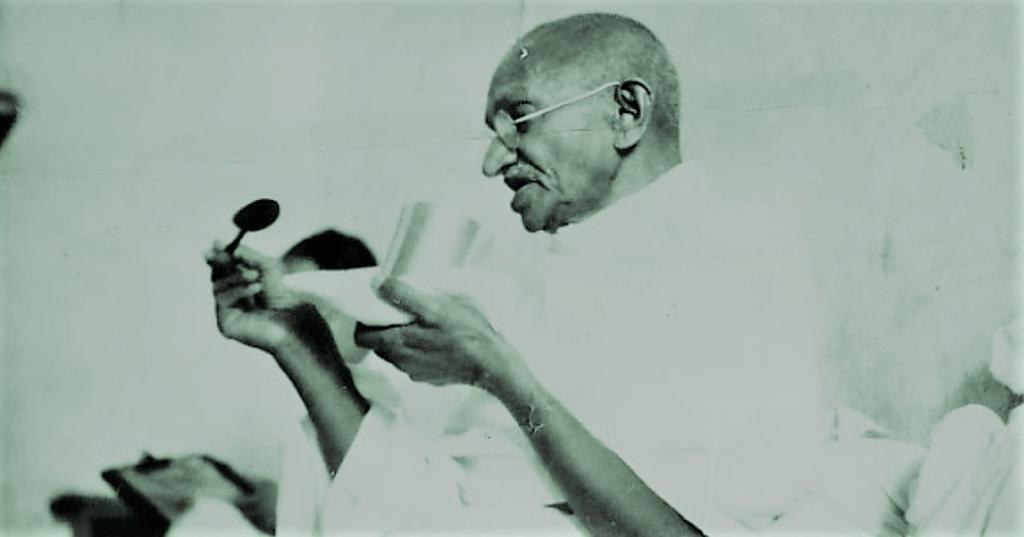 Many millenials in India today devote a lot of time and energy to shed their weight. They go to gymnasiums, do zumba, swim and do planks. They also eat exotic food items from foreign lands such as avocadoes and quinoa.

But in the early years of the last century, there was a man who had foreseen the usefulness of all the ‘fad diets’ that we now partake. That man was Mahatma Gandhi, whose 152nd birth anniversary we will celebrate October 2, 2021.

Just two years ago, two scientists from the National Institution of Nutrition, Indian Council of Medical Research (ICMR), had written a paper on Gandhi’s philosophy about nutrition and diet.

Thought for food: Mahatma’s Views on Nutrition, Controlled and Balanced Diets, written by SubbaRao M Gavaravarapu and R Hemalatha, was published in the Indian Journal of Medical Research.

The year 2019 marked 150 years since the birth of Mahatma Gandhi.

The paper was written “to provide an overview of his (Gandhi’s) views on food, diet, nutrition and ‘experiments with food’ and their relevance.” Here are some of its key highlights.

Gandhi believed in a “minimalistic approach to diet”, the authors wrote. He believed that food “was energy and even a medicine that is required to keep our body healthy and fit for work and, hence, one should take only what is required in minimum quantity and should refrain from eating to appease taste buds.”

This is reflected in Gandhi’s own statements:

The body was never meant to be treated as a refuse bin, holding all the foods that the palate demands.

Eat sparingly now and then fast; eat on the lower side rather than over eating.

Gandhi, being a deeply religious man, described the human body as ‘the temple of God’ in his paper, Young India, August 8, 1929:

Instead of using the body as a temple of god, we use it as a vehicle for indulgences and are not ashamed to run to medical men for help in our effort to increase them and abuse the earthly tabernacle.

The Mahatma was against the polishing or refining of cereals such as rice and wheat.

The cereals should be properly cleansed, ground on a grinding stone, and the resulting flour used as it is. Sieving of the flour should be avoided. It is likely to remove the bhusi or the pericarp which is a rich source of salts and vitamins, both of which are most valuable from the point of view of nutrition. The pericarp also supplies roughage, which helps the action of the bowels…

Today, the latest nutritional studies wholeheartedly agree that polishing or refining can result in a loss of nutrition as well as fibre.

Gandhi was wary of sugars, especially refined sugars, given their potential to being addictive and consequently wreaking havoc on the body.

However, he made an exception for gur (jaggery):

… Gur is any day superior to refined sugar in food value and if the villagers cease to make gur as they are already beginning to do, they will be deprived of an important food adjunct for their children. They may do without gur themselves, but their children cannot without undermining their stamina. Gur is superior to bazaar sweets and to refined sugar. Retention of gur and its use by the people in general means several crores of rupees retained by the villagers.

Gandhi was also in favour of ghee. Today, many Indian nutritionists have advised that taking ghee in moderation helps the body, rather than harm it, as is popularly thought:

If ghee can be had, oil becomes unnecessary. It (oil) is difficult to digest and is not so nourishing as pure ghee. An ounce and a half of ghee per head per day, should be considered ample to supply the needs of the body…Those who cannot afford it should take enough oil to supply the need for fat.

On the other hand, Gandhi was strongly opposed to Vanaspati ghee (hydrogenated vegetable oil), as he wrote in his newspaper Harijan:

Vanaspati is wholly superfluous. Oils may be refined of injurious property, but they do not need to be solidified nor need they be made to look like ghee… counterfeit coins are heavily punishable. Why not counterfeit ghee?

He felt pulses were not good for sedentary people. This is what he wrote about them in his book, Key to Health:

I can say without any hesitation whatsoever that those who follow sedentary occupations as for instance, clerks, businessmen, lawyers, doctors, teachers and those who are not too poor to buy milk, do not require pulses. Pulses are generally considered to be difficult to digest and are eaten in a much smaller quantity than cereals.

Gandhi turned whole-heartedly to vegetarianism in the 1880s, when he read Henry Salt’s book, Plea for Vegetarianism:

Man was not born a carnivorous animal, but born to live on fruits and herbs that the earth grows.

Surprisingly though, he also advocated consuming eggs in Key to Health:

… in reality, they are not (flesh foods)… sterile eggs are also produced. The hen is not allowed to see the cock and yet it lays eggs. A sterile egg never develops into a chick. Therefore, he who can take milk should have no objection to taking sterile eggs.

There are people in the world so hungry, that God cannot appear to them except in the form of bread.

The Father of the Nation used to walk around 18 km every day for nearly 40 years, according to the ICMR paper. During his campaign from 1913 to 1948, he walked around 79,000 km, which is equivalent to walking around the Earth twice, the authors note.

His writings attach great importance to exercise. For instance, he says in The Story of my Experiments with Truth:

Today I know that physical training should have as much place in the curriculum as mental training.

I hold that where the rules of personal, domestic and public sanitation are strictly observed and due care is taken in the matter of diet and exercise, there should be no occasion for illness or disease. Where there is absolute purity, inner and outer, illness becomes impossible. If the village people could but understand this, they would not need doctors, Hakims or Vaidyas.

“Gandhiji’s mantra about food was that it should be simple, non-oily and non-spicy. Eat but also retain the strength to digest it. Burn calories. His overall message regarding food is simplicity in lifestyle,” Sudarshan Iyengar, Gandhian and former vice-chancellor of Gujarat Vidyapith in Ahmedabad, told Down To Earth.