Remains of Neanderthals discovered in Germany 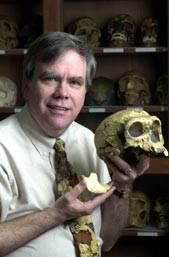 remains of Neanderthal human skeletons and their tools have been recently found in Germany's Neander valley. The discovery was made by paleontologist Fred Smith of the Chicago-based Loyola University and his colleagues. The remains were earlier dug up in 1856 from a valley cave by quarry workers. But the workers only kept the larger bones, and threw the smaller ones back. Several weeks later, it was found that the bones belonged to the early humans. But by then, the cave had been quarried away and the fragments buried.

The researchers used historical records to work out where the cave's contents might have fallen. After picking their spot and digging down four metres, they struck the bone. Carbon dating of the remains reveals that they belong to Neanderthals who lived during the Ice Age, about 40,000 years ago. Neanderthals are thought to have arrived in Europe about 120,000 years ago, and they died out 90,000 years later. dna of the newly found specimens hints that they might be more closely related to Neanderthals from eastern Europe than to their German neighbour.