Encephalitis is not only threatening lives in Bihar, but also the livelihood of litchi farmers as unconfirmed reports link the disease to the fruit 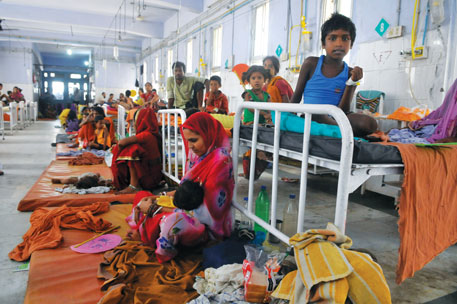 Muzaffarpur in Bihar is as infamous for encephalitis as it is famous for its shahi litchis. Acute encephalitis syndrome (AES) has been a leading cause of child deaths in the state. Till the time of filing this report, 210 children across Bihar had died of AES since May this year. According to official figures, since 1994, Muzaffarpur alone has witnessed 995 AES-related deaths of children. Unofficial estimates put this figure at at least 1,800 in the district utterly lacking healthcare infrastructure.

The disease is now giving sleepless nights to litchi farmers in the state as several reports have surfaced in the media on the probable link between AES and eating litchi. Any confirmed evidence will put at stake the livelihood of thousands of farmers as the state’s economy depends on litchi cultivation to a large extent. According to the Food and Agriculture Organisation, litchi is the ninth most produced fruit in India and Bihar is its biggest producer. Muzaffarpur is one of the leading producers in the state.

Could litchi be the culprit?

Although there are no studies that directly link litchi to AES, media reports claim that litchis have chemicals similar to those found in ackee (Blighiasapida), a Jamaican fruit, which causes acute encephalopathy disease in children called Jamaican vomiting sickness. Some reports have also linked pesticide use in litchi cultivation to AES. 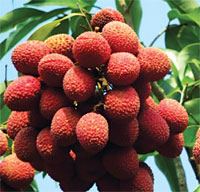 Vishal Nath, director of National Research Centre for Litchi (NRCL), a research body that promotes litchi farming, denies the link. “Farmers in Bihar are not rich enough to buy pesticides. And even if they use pesticides, they use the very mild ones,” he says.

Scientists at NRCL have been flooded with queries from farmers and consumers. “Litchi is grown in Tripura, Assam, West Bengal, Bihar, Himachal Pradesh and Punjab. If litchi causes AES, why are there no AES-related deaths in the other states?” Nath asks (see ‘Irresponsible reportage can harm business’).

Dhananjay Singh, a litchi farmer, says farmers in the region are always in touch with NRCL to ensure better produce. “I received a lot of queries from my buyers in Delhi and local consumers. Fortunately, our business did not suffer,” he says.

While farmers might heave a sigh of relief for now, children continue to succumb to AES in hospitals. In the intensive care unit (ICU) of Sri Krishna Medical College and Hospital (SKMCH) in Muzaffarpur, Roushan Ali, 16, sits stone-faced on a stool. Beside him is the body of his 11-year-old brother, Parvez. “He is dead, he is dead,” Roushan mutters. Outside the ICU, a woman clutches the body of her three-year-old daughter. A group of men, apparently her relatives, wait for her to loosen her grip so that they can take away the body for the last rites.

Corpses of children, wailing mothers and unconscious children in hospital beds, with a web of tubes running through their hands and legs, are a common sight at SKMCH. Children battle for lives in the ICU, in the wards, in spaces between the beds and in the fanless corridors of the hospital. Doctors and nurses rush from one patient to another to save whoever can be saved.

Braj Mohan, head of the paediatrics department, SKMCH, who has been working in the hospital for the past 18 years, says that the symptoms of AES have changed drastically. “Till 2010, AES afflicted children had three prominent symptoms—high fever, seizure and frothing. In the past few years, children suffering from AES have not reported fever,” he says, adding that this year patients have also reported low sugar levels. The medical fraternity is, therefore, clueless about the measures to be taken.

The situation is worsened by inadequate number of beds, doctors and nurses, and lack of basic infrastructure like electricity and speedy ambulance service. Emergency ambulance services are not very effective because most drivers have quit due to non-payment of salary. Radha Devi brought her four-year-old daughter, Munni, to SKMCH after a two-hour journey by bus and autorickshaw. “We called the ambulance, but it did not come. I could not waste time waiting for it,” she says.

Deepak Kumar, principal health secretary, claims the government has adopted a policy of providing speedy medical aid to AES patients. At least 80 ambulances have been pressed into service. “We want to solve the acute infrastructure crisis at SKMCH. By next year, we plan to build ICUs with a capacity of 100 beds,” he adds.