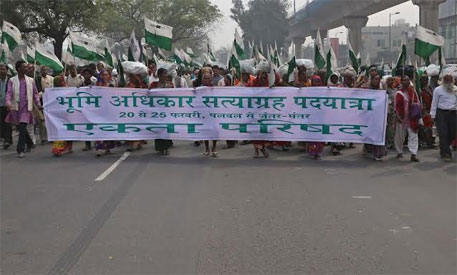 The National Democratic Alliance (NDA) government on Tuesday introduced the controversial land acquisition amendment bill in Lok Sabha which will replace its land acquisition ordinance. The bill’s introduction led to protests inside and outside Parliament. The opposition Congress party walked out and the NDA allies like the Swabhimani Paksha also expressed displeasure over the amended bill.

There were protests against the proposed land law on the streets of Delhi as well. Anna Hazare, the prominent social activist and Gandhian, along with representatives of farmers’ and civil society groups is on dharna against the amendment bill at Jantar Mantar in Delhi.

The ordinance and the amendment bill replacing it dilute the provisions of land acquisition Act passed by the previous Congress-headed UPA government in 2013 in the wake of increasing land conflicts and violent protests.  At that time, the Bharatiya Janata Party (BJP) which leads NDA and was in opposition, had supported the Act and also promised to make it more people and farmer-friendly once it come to power. Instead of keeping its promise, NDA is doing away with important provisions in the land acquisition law relating to obtaining consent or project-affected people and the mandatory social impact assessment (SIA). If the amendment comes into effect, public-private partnership projects, including private health and educational institutions, defence manufacturing projects, land purchase for affordable housing projects, industrial corridors and rural infrastructure will not require consent from land owners/farmers; SIA will also not be mandatory.

The proposed amendment bill now brings under its purview 13 other Acts which were earlier excluded. These Acts include the Coal Bearing Areas Acquisition and Development Act of 1957, the National Highways Act of 1956, Land Acquisition (Mines) Act 1885, Atomic Energy Act of 1962, the Indian Tramways Act 1886, the Railways Act of 1989, the Ancient Monuments and Archaeological Sites and Remains Act 1958, the Petroleum and Minerals Pipelines (Acquisition of Right of User in Land) Act of 1962 and the Damodar Valley Corporation Act of 1948. The Electricity Act of 2003, Requisitioning and Acquisition of Immovable Property Act of 1952, the Resettlement of Displaced Persons (Land Acquisition) Act of 1948 and the Metro Railways (Construction of Works) Act of 1978 are also brought under its purview to provide higher compensation, rehabilitation and resettlement benefits to farmers whose land is being acquired.

NDA is justifying its change in stance, saying the 2013 LARR Act stalled investment up to 20 lakh crore especially in rail, steel, mining and roads sectors.

Mustering the numbers
The question now is: can NDA push the bill through? It has majority in Lok Sabha but it does not have enough numbers to get Rajya Sabha to pass it. Congress, one of the important opposition parties, is in no mood to cooperate.

Mallika Arjun Kharge, leader of Congress in the Lok Sabha, termed the amendment and the ordinance as anti-farmer and anti-people.

“It’s an anti-farmer and anti-people ordinance. Government is in no mood to consult either the standing committee or other legislative bodies. The government wants to bulldoze opposition. We are walking out,” said Kharge in his address and walked out with other Congress MPs.

“On June 2014, government consulted states over proposed amendment,” said Naidu. “Even the Congress-governed states like Maharastra was against LARR. States said that the then UPA government made development impossible in its states. States want dilution in the Act,” he added.
But the Telangana Rashtra Samithi (TRS) belied this claim.

“Our prime minister claimed to be a believer in cooperative federalism. But PM neither consulted newly formed state Telangana nor incorporated our demands,” said Vinod Kumar Boinepalli of TRS.

An explosive situation
If the proposed amendment is brought into force, it would create immense pressure on land resources. It would intensify the land conflicts and degrade and impact food security since more land will be diverted from agricultural to non-agricultural purposes.

Land use policy is critical for reducing conflicts in India where pressure on land is high. The country accounts for about 2.4 per cent (328.73 million hectares) of the world’s geographical area but supports about 17 per cent of the world’s human population and 15 per cent of livestock. Continuing fragmentation of land, degrading natural resource base and emerging concerns of climate change have intensified the pressure on this finite resource. The desire of aggressive industrialisation only makes it worse. Since economic liberalisation in the early 1990s, millions of hectares of land has been diverted for non-agricultural purposes. This is risking the food and environment security of millions of people and resulting in large-scale violent conflicts and, subsequently, migration.
Calculations by the Delhi-based non-profit Centre for Science and Environment show that close to 0.57 million hectares (ha) of land was diverted for industrial and non-agricultural purposes between 2007 and October, 2014.

Another study by the Society for Promotion of Wastelands Development released in 2012 shows that at current pace of expansion four industrial sectors—agri-business, infrastructure, extraction activities and non-conventional energy—will require an additional 11,447,559 ha by 2035. Currently, these sectors possess 6,511,266 ha of mainly common and forest land.

This study also claims that land acquisition has impacted one-third of India’s population. Every state and forest is embroiled in disputes over land rights. These disputes play out in courts and on the streets, in the form of hunger strikes, mass demonstrations and violent uprisings. The Indian government estimates 10,000 armed fighters and 40,000 supporters are involved in violent struggles, often over land rights, in rural India.

The new government recently launched “Make in India” campaign to encourage world’s manufacturing giants to open their units in the country. This will require land on a large scale, creating more pressure. Where will this land come from?

The Right to Fair Compensation and Transparency in Land Acquisition, Rehabilitation and Resettlement (Amendment) Bill, 2015

Question raised in Rajya Sabha on plans for people affected by land acquisition, 04/12/2014