Over 5.9 million voters, seeking solutions to local environmental and pollution problems, did not favour any candidate 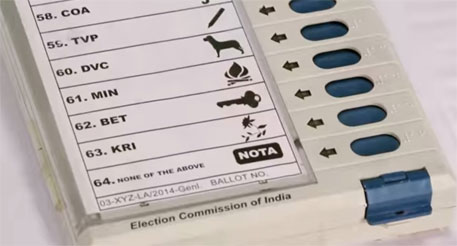 With “none-of-the-above” (NOTA) option introduced for the first time in India in the 2014 general elections, Meghalaya voters had the highest share of NOTA votes of about 2.8 per cent. Across the 29 states, a total of 5.96 million voters exercised this option, which is 1.1 per cent of the vote share. The highest number of NOTA votes were cast in Uttar Pradesh (590,000), followed by Gujarat (430,000).

NOTA, often considered as a waste by election officials, came into force in 2013 with a campaign on right to express dissatisfaction with all candidates contesting from a particular constituency. The election official who announced Meghalaya’s share of NOTA was quoted by Press Trust of India as saying: “The NOTA option on EVMs has no electoral value. Even if the maximum number of votes cast is for NOTA, the candidate getting the most of the remaining votes would be declared winner.”

Nilgiris, a Scheduled Caste constituency in Tamil Nadu, has the highest number of NOTA votes (46,559) cast in a single constituency. 2G scam-tainted A Raja, the sitting MP from Nilgiris constituency lost this seat to AIADMK rival C Gopalakrishnan. According to environmental and tribal activist from Tamil Nadu, C R Bijoy, forest rights and land entitlement issues are affecting most of the people in this region. “Before the elections, voters were divided. While some decided to exercise NOTA, others wanted to find political candidates who would support their struggle to find land entitlement. There are hundreds of families still struggling to get their land titles,” said Bijoy.

Incidentally, in Gujarat, according to an analysis done by environmental and social activists, Rohit Prajapati and Trupti Shah, areas casting high number of votes have environmental and forest-related issues. In Dahod, NOTA was at third position with over 32,000 votes. Forest rights and water availability are two major problems in this tribal constituency bordering Madhya Pradesh. In Bharuch, more than 23,000 voters whose ground water source has been polluted did not vote in anyone’s favour.

However, in case of Meghalaya, according to anti-mining activist, ArwatChallam, environmental issues did not matter for people choosing NOTA. “In coal mining areas, people voted in large numbers for candidates. People did not felt represented by any of the candidates so they chose NOTA,” says Challam. Recently, National Green Tribunal (NGT) had banned coal mining in Garo Hills, especially after large illegal mining was found.