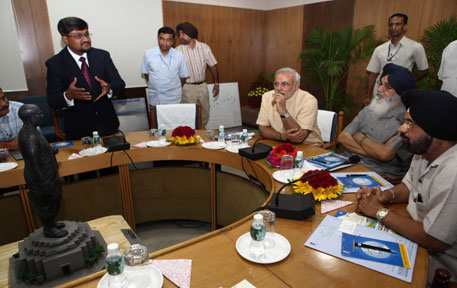 Environmental activists have threatened to take to court the Gujarat government and Sardar Sarovar Narmada Nigam Limited (SSNNL) for the 180-metre Statue of Unity in Narmada district of Gujarat. Citing lack of clarity on the environmental impact assessment, they sent a notice to Ministry of Environment, Forests and Climate Change (MoEFCC) on January 18, asking it to direct the Gujarat government to stop the construction of the statue. Letters have been also sent to the construction company, Larsen and Toubro.

“We will look forward to your urgent action and also point-wise response to all our letters. Therefore, we call on you to cease all Statue of Unity Project activities and not commence further work until the due process of environmental clearance is undertaken. If project activities are not immediately stopped, you will invite immediate legal action,” the activists wrote to MoEFCC.

According to Vadodara-based environmental activist Trupti Shah, construction work on the project requires environmental clearance as it is situated in an ecologically and environmentally sensitive zone, on the boundary of the Shoolpaneshwar Wildlife Sanctuary. She says the project will affect the river and the region’s biodiversity by bringing thousands of tourists to the area.

Shah also warns the project will exert pressure on a geological fault line. “The government claims to having conducted a seismic hazard study of the project by its in-house Institute of Seismological Research, but the study is not valid unless peer review is conducted. The study has not even been made public. We believe construction activity is illegal in the absence of environment clearance from the Union ministry as it violates Environment Protection Act, 1986, the Environment Impact Assessment (EIA) notification of September 2006, as well as orders of the NGT and various other courts. We will take legal recourse so that the government reveals its stand on an important aspect of the mega project,” she says.

Shah is one of the 22 activists who have taken the fight against the statue to court. She said they approached government departments and filed RTI applications, but got no clear information. “If we do not get a reply within seven days, we will file a case against the statue in the National Green Tribunal (NGT),” she said. Incidentally, local residents have not been made part of this letter. “We fear that local village residents, if included in this petition, would be harassed by the state.”

The foundation stone of the Statue of Unity Project was laid by the then chief minister of Gujarat, Narendra Modi, on October 31, 2013, and a work order of Rs 2,979 crore was given to Larsen and Toubro. According to the Gujarat government, construction of the Rs 176 crore-Shreshtha Bharat Bhawan, which is part of the project, has already begun. Work on the statue is likely to begin soon.