Wetter-than-average monsoon potentially facilitated a boom in mosquito population, which spread the virus 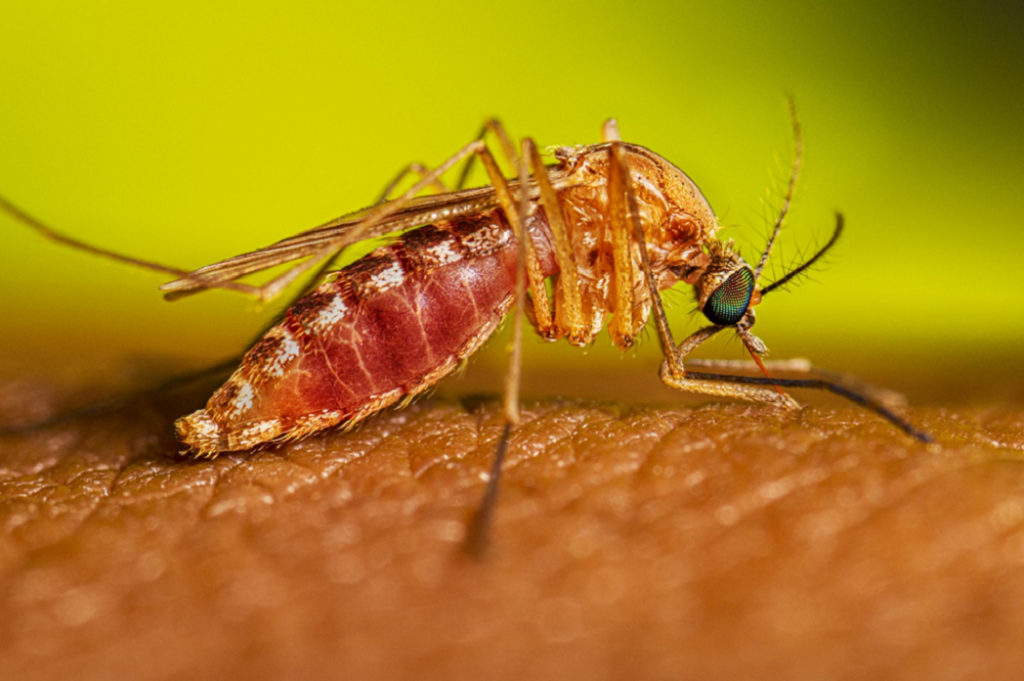 West Nile virus is spread through the bite of an infected mosquito. Photo: CDC

Monsoon 2021 saw the United States’ largest single outbreak of West Nile virus (WNV) disease, with over 1,600 reported cases. Climate change may have been behind this spurt in cases, which was centred in Maricopa county, Arizona.

The 2021 monsoon across the southwest US — Arizona, New Mexico and far west Texas — received more rainfall than usual. This was surprising as it followed the driest monsoon on record in 2020, according to National Weather Service, a US federal agency for weather forecasts.

The wetter-than-average monsoon may have triggered the rise of West Nile virus diseases. 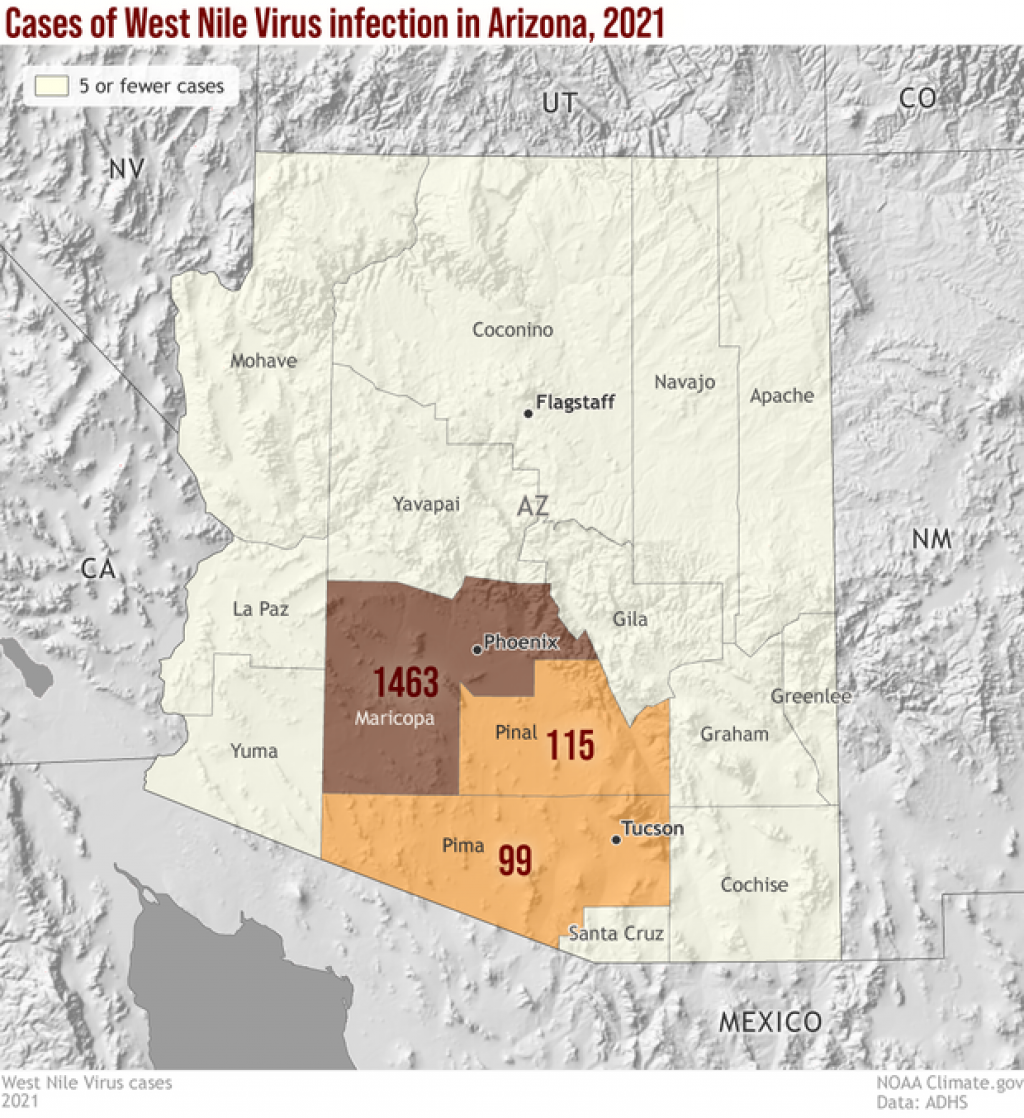 The link between the excess rainfall and rise in cases was discovered by Karen Holcomb, a postdoctoral researcher with the National Oceanic and Atmospheric Administration (NOAA) and the US Centers for Disease Control and Prevention (CDC).

NOAA is an American weather forecast agency, while CDC is the nation’s federal health agency.

Improving understanding of the linkages between climate and West Nile virus disease prediction is an active area of research, wrote Halcomb. “Understanding the climate drivers of West Nile virus transmission can lead to improved predictions of high-risk locations and save lives,” she said.

Climate change increases the risk of human exposure to West Nile virus, according to the CDC. Climate change is expected to affect the geographic and seasonal patterns of vector-borne diseases, that is, diseases caused by pathogens transmitted by mosquitoes, ticks, fleas, or other arthropods in the US.

Studies show that warmer temperatures associated with climate change can accelerate mosquito development, biting rates, and the incubation of the disease within a mosquito

The virus had been detected in two people along with a “record number” of infected mosquitoes throughout the city, the New York City health department announced August 16, 2022, according to media outlet New York Times.

A total of 54 cases and four deaths have been reported throughout the country this year, according to the health department’s announcement.

What is West Nile Virus?

WNV is a zoonotic virus, meaning it spreads from animals to humans. It is a member of the flavivirus genus and belongs to the Japanese encephalitis antigenic complex of the family Flaviviridae.

The virus circulates between birds and mosquitoes in nature, but not all birds react similarly to the virus. Some birds like crows and jays often die following infections. This is why some public health departments test dead birds for the presence of WNV as an early-warning indicator of local virus transmission.

The virus is most commonly spread to people by the bite of an infected mosquito. WNV diseases occur during mosquito season, which starts in the summer and continues through fall. There are no vaccines to prevent or medications to treat it, according to the CDC.

Read more: Artificial light may become a new weapon in the fight to control malaria

The virus can cause neurological diseases and death in people, according to the World Health Organization. About aa fifth of the people who are infected develop a fever and other symptoms. About 1 out of 150 infected people develop a serious, sometimes fatal, illness.

WNV is commonly found in Africa, Europe, the Middle East, North America and West Asia. A cycle involving transmission between birds and mosquitoes maintains it in nature. Humans, horses and other mammals can be infected as well.

How did climate influence the Arizona outbreak?

The 201.42 mm of rainfall in monsoon 2021 across Maricopa county was distributed over 23 days of measurable precipitation. On average, 55.88 mm of rain falls in this period, concentrated on fewer days.

The continual presence and increased moisture maintained mosquito breeding sites and potentially facilitated a boom in the mosquito population when the virus was circulating in the local bird populations, suggested Holcomb.

The optimal temperature for WNV transmission from mosquitoes to humans is 23-25°C in general. At cooler temperatures, the virus replicates more slowly. Mosquitoes are not able to survive at higher sustained temperatures.

The average June to September temperature was 31.33°C for Maricopa county, nearly identical to the historical average for these months. Therefore, large deviations in average temperature are not behind the outbreak.

Climate likely had a large impact but was not the only factor influencing the spread of WNV, according to Halcomb. The transmission dynamics can be complex, with multiple species involved.

For example, there was little evidence of WNV circulation between birds and mosquitoes in Maricopa county in 2020. Therefore, in 2021, a large proportion of the bird population likely did not have antibodies to the virus, thus allowing rapid spread of the virus among birds and mosquitoes.

This led to diseases eventually spilling over to humans, suggested Halcomb.

Read more: Mosquitoes in a warming world: Aedes the menace

Climate factors affect West Nile virus transmission differently depending on which mosquito species are most prevalent in an area, according to research published in the American Journal of Tropical Medicine and Hygiene.

Increasing temperatures enable mosquitoes to survive at higher latitudes, extending the season when mosquitoes and viruses can proliferate. This increased the risk geographically and seasonally, Halcomb found.

WNV was first isolated in a woman in the West Nile district of Uganda in 1937, according to the WHO. A WNV circulating in Israel and Tunisia was imported to New York in 1999. This produced a large and dramatic outbreak that spread throughout the US in the following years.