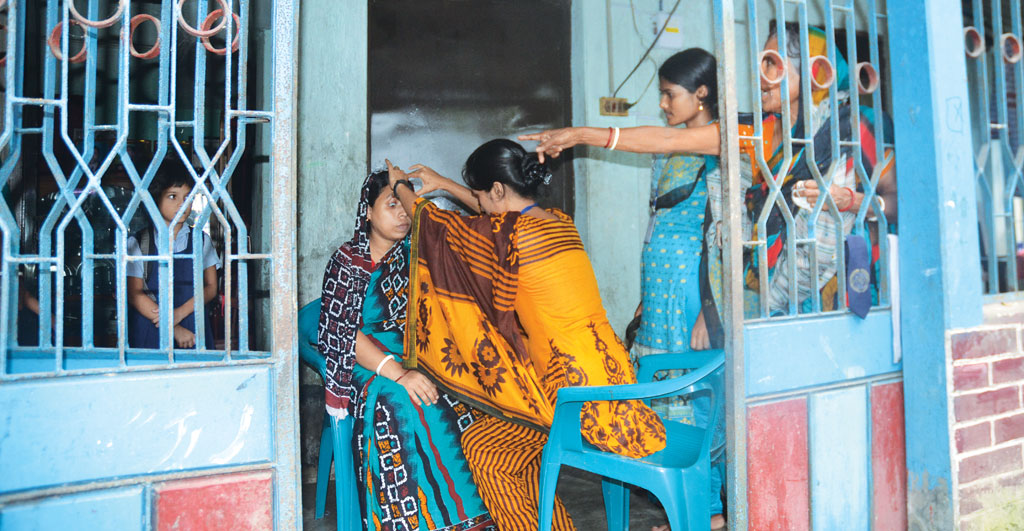 Two girls, in their late 20s, knock on the door of Subhash Barman, a fisherman living in Gopinathpur Malopada village, about 35 km from Dhaka. The family welcomes them warmly. Shilpi Barman, wife of Subhash, is in her seventh month of pregnancy. These girls cut Shilpi’s nails and check her blood pressure. They then inspect her bedroom to check whether the bedsheets are clean and also collect her urine sample.

These girls are paramedics from Gonoshasthaya Kendra (GK), a non-profit, which provides community healthcare to the marginalised. Started in 1972, GK has today reached more than 1.5 million rural people in 647 villages through over 1,100 employees, 43 primary health centres (PHCS), five referral hospitals and one medical college.

Their efforts have helped achieve the targets under the Millennium Development Goals (MDGs) for child and maternal mortality in hundreds of villages in Bangladesh, 10 years before the MDG deadline of 2015. GK’s success was highlighted by a World Bank report, To the MDGs and Beyond: Accountability and Institutional Innovation in Bangladesh, in 2006. It says, “GK has already exceeded the MDG for infant mortality a decade ahead of time, while the rest of the country remains at a level two-thirds higher. On maternal mortality, GK has achieved a rate of 186 per 100,000 live births, 42 per cent lower than the national average in 2001 when the decline for country as a whole was much less.” Besides, GK provides multiple health facilities to vulnerable people.

GK began as a field hospital for the wounded freedom fighters and refugees during the liberation war in 1971. Realising that millions of people in the rural areas had no access to any kind of healthcare facilities, these survivors established GK on April 27, 1972.

The GK model relies primarily on paramedics who knock on the doors of poor people in villages providing healthcare. “We identify pregnant women, ailing children and the elderly in villages with the help of the bai (traditional midwife),” says Devi Haldar, one of the GK employees visiting Shilpi.

The paramedics at GK are mainly young girls, hailing from local communities, who are trained for a period of six months at GK’s medical college in Savar, around 30 km from Dhaka. And if Shilpi is to be believed, these paramedics help them a lot. “This is my third pregnancy and all deliveries have been normal so far. My kids are healthy too,” adds Shilpi (see ‘Networked model’).

Bangladesh has one paramedic for every 7,200 population, while GK has one paramedic for every 5,000-6,000 population. “The team of paramedics is the face of the organisation,” says Rezaul Haque, director, rural health and training, GK. They are trained to treat general illnesses like fever, headache, dehydration and diarrhoea. “If we receive a serious case, we refer it to the local PHC,” says Haldar. For every six paramedics, the organisation has one field supervisor, who reports to the health in-charge.

Similarly, the organisation has one intern for every 30,000-40,000 population who treats patients in PHCs or referral hospitals.

These interns are graduating doctors of GK’s medical college located in Savar. At present, the organisation has around 153 interns and 34 physiotherapists. These interns serve in the rural areas as mandated in their course. They get their certificates only after completing their internship period. “We are not a doctor-dependent organisation, but paramedics-driven. Here, doctors are only to assist,” says Manzur Kadir, coordinator of GK.

When it began work, GK charged all income group households a flat rate of 2 Taka per year. Over the years, the organisation realised that this was a burden for poor households. After conducting a socio-economic survey to categorise the populations, GK devised an insurance model in which the premium varied depending on the categories: upper and middle class who pay a higher premium and ultra poor, poor and lower-middle class who pay very little, yet receive comprehensive healthcare coverage.

The insured families get inpatient coverage and discounts on medications. For specialised services, the cost varies depending on their categories. But poor households, whether insured or not, can access PHC services, including preventive and reproductive healthcare services free of cost. “People are willing to pay money, but they need proper and quality facilities,” says Kadir.

“We have decided to audit every birth and death,” says Zafrullah Chowdhury, founder of GK. “I see sustainability in terms of accessibility, irrespective of whether people use the services or not.” Organisations like GK are literally hand-holding the Bangladesh government’s rural health-care system.