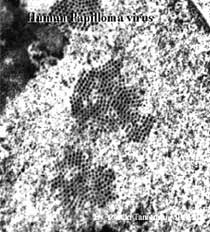 a test for the sexually-transmitted human papilloma virus ( hpv ) may rival the pap smear as an accurate way of testing for cancer and pre-cancerous conditions.

The pap smear, which costs us $25 to $35, is the most widely used screening test. It requires a skilled professional to do a pelvic exam and scrape cells from a woman's cervix. The cells are then analysed under a microscope. But in hpv testing, which costs $45 to $60, women themselves can collect a sample of cervical tissue at a clinic or doctor's office using a small brush or cotton swab. The tissue is then analysed for dna from 13 types of hpv considered to be the main culprits in cervical cancer.

In the first study, Thomas Wright Jr of Columbia University and colleagues from avsc International, usa and the University of Cape Town, South Africa screened and followed 1,365 black South African women in the 35 to 65 age group. Using the hpv test, the researchers identified 37 of 56 women with high-grade cervical disease or cancer - a detection rate of 66 per cent.

In the second study, led by Mark Schiffman of the National Cancer Institute, usa , researchers screened 8,554 women above the age of 18 in Costa Rica. A total of 138 cases of high-grade cervical disease or cancer were found, the detection rate being 88 per cent.

However, the two studies found that the hpv test produced far more false reports compared to the pap smear. It forced many more women to go for further testing.

The number of false reports, therefore, puts doubts on the hpv test's widespread use. As a screening technique, the test may be most applicable in developing countries, where pelvic exams and lab exams of cervical cells are often unavailable, says Jack Cuzick of the Imperial Cancer Research Fund in London.

The hpv test is now licensed in the United States only as a follow-up to an abnormal pap smear. It has not been approved for routine screening, though it is available for that purpose in other countries.

The test is based on the discovery that hpv causes almost all cases of cervical cancer. hpv infects an estimated 40 million Americans and many more people worldwide. Though most of hpv 's 80 strains cause no permanent harm, perhaps 1 per cent of infected people get a strain that can cause cervical cancer.