Cyclone Hudhud battered Visakhapatnam (Vizag), Srikakulam and Vizianagaram districts in Andhra Pradesh, leaving three persons dead. The cyclone made landfall at Kailashagiri on the outskirts of the port city of Visakhapatnam.

Andhra Pradesh Chief Secretary I V R Krishna Rao confirmed the deaths. "Two died after trees fell on them and one was killed when a compound wall collapsed in Visakhapatnam and Srikakulam districts, respectively," he said. The wind also damaged electric poles andmobile towers, affecting power supply and communication in the region. 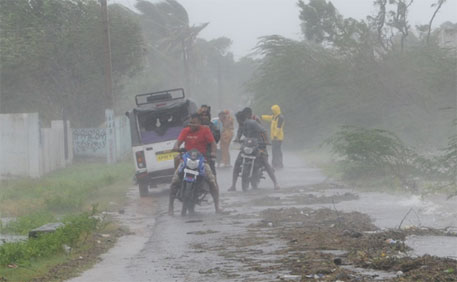 Very heavy rains and winds continue in Visakhapatnam and the other districts. Life was thrown out of gear as winds stormed at 180-190 km/hr and torrential rains hit the coastal districts. "I have never experienced such winds in my life," said Hari Prasad, a doctor from Visakhapatnam. “During the first hour, it was extremely fearsome. Nobody dared to venture out," he added.

With uprooted trees, torn and scattered flex boards and pieces of roof tops lying on roads, Visakhapatnam looks devastated. The city, which usually escapes the fury of cyclones, was experiencing a complete cut off in power and communication facilities at the time of filing this report. The authorities had stopped the supply of electricity on Saturday to avoid electrocution. Exact reports of damage have slowly started emerging from different parts of the city. 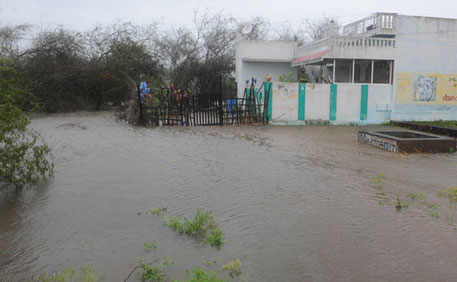 "Due to the hilly topography, the cyclone's intensity will reduce over the next 12 hours. However, Visakhapatnam will experience heavy to very heavy rainfall for the next three days," Laxman Singh Rathore, director general of the India Meteorological Department (IMD) in New Delhi, said.

This may cause floods in the low-lying areas, leading to destruction of crops. Cyclones Nilam, Phailin and Lehar, which hit the Andhra coast last year, had also led to floods.The state government is yet to release preliminary reports of the intensity of damage caused by Hudhud.

Theauthorities had evacuated more than 300,000 people to safer placesby Sunday morning. About 40,000 of them are in relief camps. The state administration succeeded in protecting its people through coordinated disaster management efforts and accurate weather forecasting. It had alerted all coastal districts of the state well in advance. The districts had listed 520 villages that would be worst affected by the cyclone. Block-level officials were asked to step in with evacuation and relief measures.

More than 370 shelters were readied with food and medicines to last a month. As many as 45 rescue teams of national and state disaster response forces, besides the Army, Navy and Coast Guard, were on stand-by for emergencies. While nightfall has not deterred the efforts of these teams, they will launch full scale operations from Monday morning. 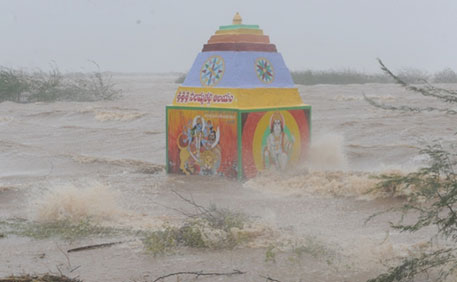 Learning to deal with disasters has not been easy for the state. Andhra Pradesh is extremely vulnerable to cyclones, storm surges and floods. The state faces cyclones of moderate to severe intensity every two to threeyears. Since 1975, the state had faced more than 60 cyclones.

The deadliest cyclone that struck the Andhra coast in November 1977 killed about 10,000 people. About 250,000 cattle heads perished, one million houses were damaged and 1.35 million hectares (ha) of land with crops were destroyed that year.