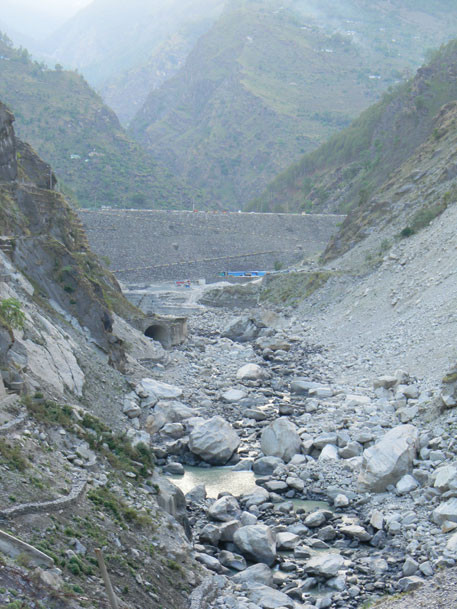 A Supreme Court-appointed panel had clearly blamed hydropower projects for the Uttarakhand disaster last year. But managers of these projects continue violate environment norms by mishandling the muck and debris lying at the project sites.

A group of 12 civil society groups had written to the Union environment ministry in July, 2013, seeking suspension of environment clearance of six hydropower projects. The letter said irresponsible handling of the muck generated from the project sites had greatly damaged villages and towns downstream of rivers and that the damage would have been much less severe if the debris had not been dumped on the riverbed.  The projects blamed were: the 99 MW Singoli Bhatwari hydroelectric project (HEP), 76 MW Phata Byung, 330 MW Srinagar HEP (all three were under-construction), 400 MW Vishnuprayag HEP, 280 MW Dhauliganga HEP, Maneri Bhali I and II HEPs (all operating projects).

The letter said that the projects had been illegally dumping the muck into the river or piling them in heaps on the hill slopes without an adequate retaining wall. The activists also alleged that the project authorities opened dam gates without any warning, which led to flooding of several villages downstream. The debris washed into homes.

The National Green Tribunal (NGT) in January 2014 had issued to notice to the managers of the Srinagar Hydroelectric Project  for the damage caused to various areas in Srinagar town during Uttarakhand floods because of irresponsible dumping of debris removed from the site of the 330 MW project. Besides Alaknanda Hydropower Co. Ltd (AHCL), notices were also issued to the Union Ministry of Environment and Forests (MoEF) and Uttarakhand state government. The petition was filed by Premballabh Kala of people’s group, Srinagar Bandh Aapda Sangharsh Samiti, and activist Vimal Bhai of Matu Jansangthan, seeking compensation for damage caused to the areas such as Shaktibihar, Chauhan Mohalla, Alkeshwar Temple and government as well as private property.

“Several school, colleges and government institutes were inundated and still buried in the debris that came along with the river from the project site. Despite NGT ruling, we are yet to get any compensation from the projects. Even the project authorities do not give compensation, they should at least clear the debris from IIT campus and other institutes so that our children continue studies,” says Ashok Panwar, a resident of Srinagar town whose house was buried in the debris.

In another petition filed before NGT in October 2013, Vimal Bhai of Matu Jansangthan alleged Lambagarh, Pandukeshwar, Govindghat, Vinayak Chatty, Pinolaghat villages and other areas downstream were heavily damaged during the floods due to the Vishnuprayag HEP. Since the dam gates were closed by the project authorities, huge amount of muck and debris accumulated in the reservoir of the dam. Vimal Bhai says that Jaypee Associates, the project proponent, had accepted that only two gates were opened but one gate was not opened due to some technical fault.

After the incident, to clean the reservoir, the project proponent started removing the flood material from the reservoir and dumped it directly in the river bed of the Alaknanda. This was not only in violation of the environmental norms but also caused damage to life and property of the people in the downstream areas. The petitioner also said that the river changed its course because of this and is still a threat to the people living downstream.

On 30 May 2014, the five judge bench of the NGT directed Jaypee Associates to file a comprehensive affidavit on disposal of debris lying in the Vishnuprayag HEP in the Alaknanda.
Even though NGT has directed Jaypee to file an affidavit, it is business as usual at the dam site. 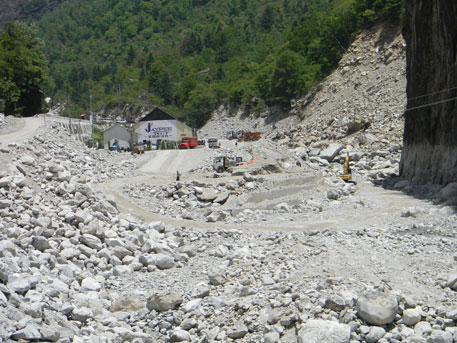 “There is hardly any area left for the river at the barrage site of Vishnu Prayag HEP. The authorities have failed to maintain minimum ecological flow. The way muck is dumped on the river bed, it seems the dam proponents are waiting for the monsoon and the river to take away the muck with it. This is bound to affect the downstream ecology of river,” says Vimal Bhai. 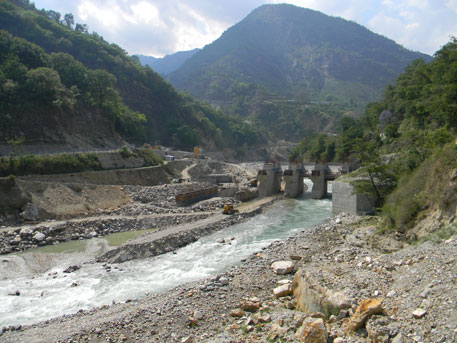 Even the Dhauliganga HEP has been repairing its project site and has closed all the gates because of which a 2 km stretch of river has gone completely dry (see pic). Several other project managers like that of Singholi Bhatwari HEP are changing the course of the Ganga tributary by dumping debris in complete violation of environmental norms.