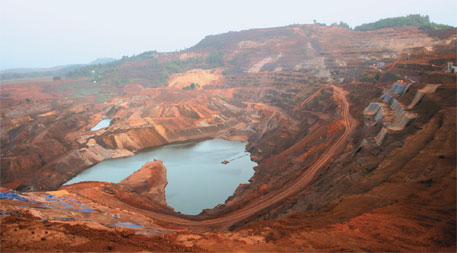 AFTER much delay the Shah Commission report on mining in Goa is out. It accuses both the state and the Union Ministry of Environment and Forests (MoEF) of allowing illegal mining in the state, putting the region’s environment and ecology at risk. The commission, headed by Justice M B Shah, was set up by the Centre in 2010 to probe into the illegal mining across the country.

In response to the report, MoEF and the state have suspended environmental clearances and operations of 93 of the 337 mining leases in Goa. About 55 per cent of the iron ore exported from India comes from Goa. The Shah Commission report was submitted to the Union Ministry of Mines (MoM) in April and was made public early-September.

The common illegalities the report points to are mining without licence, mining outside lease area and transport ing minerals illegally.

To identify lease areas, the Commission used Google Maps. It found that a total of 2,796 hectares (ha) of forestland has been encroached upon; of this 578 ha was being used by mine owners for extracting minerals. More than 127 million tonnes of minerals have been extracted from the encroached area, causing a loss of Rs 35,000 crore to the state. Besides digging pits in the encroached areas, the owners used to extract iron ore from overburden dumps which lie outside the lease area, says the report. Overburden dump is the waste produced while mining. It consists of top soil and low grade iron ore and is used to fill mine pits for closure.

Some 700 million tonnes of overburden dumps are present in Goa, as per the Indian Bureau of Mines (IBM). MoM refers to mining of overburden dump as “overburden handling”. Over the past five years, large amounts of iron ore have been exported illegally from Goa to China under the pretext of dump handling, notes the Commission.

In 2005-06, Sesa Goa applied for permission to mine 1.2 million tonnes per annum (MTPA) which was increased to 2 MTPA in 2007-08 and 3 MTPA in 2008-09. The company was offered land on lease to dump its overburden at Rs 10,000 to Rs 12,000 per plot by the state. Some of these plots extended till 1.7 km, reaching a height of 90 metres. Under the Portuguese Colonial Mining Laws of 1906 the mine lease area should be restricted to a rectangular plot of 100 ha. “If one has to mine in 100 ha, then where will he keep his overburden?” asks an MoM official. Due to dearth of space within 100 ha and to avoid “lock ing up potential mineral reserve”, lease holders dump their overburden outside the lease area, adds the official.

In its report, the Commission refers to a 2003 order of the Bombay High Court which directed that no new place for dumping overburden will be obtained without permission as under the mining rules. But most of the areas for dumping overburden in Goa have either been bought by the mining firms or they pay the landholder money for dumping on his land. “This has happened in two ways—one, where the state has been intimated, and the other where the state has no clue,” says the official.

In view of the Commission report, MoM released its Action Taken Report, advising the state to ensure proper accounting of dumps. It asked the state to ensure that transit passes are issued only to those registered with IBM. Transit passes are given to vehicles carrying iron ore out of mines and include details like quality and quantity. MoM also recommends that environmental clearance should be obtained for dump handling.

When the draft mining policy of Goa was announced in August, IBM wrote to the state mines department to incorporate separate clearances and proper classification of dumps in the policy. But in an internal note to the chief minister, the state secretary (mines), R K Verma, suggested there was no need for separate clearance for dumps as it was included in the lease.

How much is enough?

The Commission says that mines in Goa are producing about 66 MTPA of iron ore against the permitted 48 MTPA. In fact, the draft mining policy proposes to cap iron ore production at 45 MTPA.

The Commission found that 2000 onwards, IBM revised mining plans for 69 leases to increase annual production under the Mineral Conservation and Development Rules. Under the rules, IBM can revise plans based on three considerations: scientific mining, conservation of minerals or protection of environment. Consequently, the limit increased from 19.9 MTPA to 37.7 MTPA in the 69 leases, while production in other mines remained at 28 MTPA. This resulted in production of about 66 MTPA. While the Commission pointed out the revisions did not take any of the three considerations into account, IBM said the decisions were taken on the basis of state clearances given to the mines. 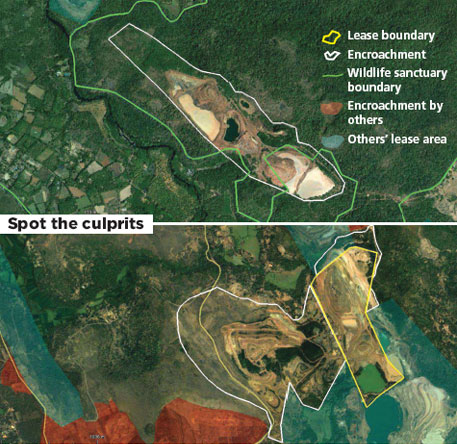 If Goa continues to mine at 66 MTPA, its iron ore will exhaust in nine years. The Commission calls for conservation of iron ore for at least 50 years and suggests an annual cap on production at 12.5 million tonnes. But MoM describes the Commission’s cap as “impractical”. “With successive mining, useable resources may be discovered which requires a revision of the mining plan. So does a change in mining technology.”

Ignoring mining rules and regulations is not just restricted to IBM. As many as 62 lease holders were found to be operating under “deemed extension” without the Centre’s approval. All the mine leases in Goa were to apply for their first renewal by November 24, 1988, under the Goa Abolition Act. Many of these lease holders applied for regularisation as late as 2000 and were accepted. As per the Mines and Mineral Development and Regulation Act, all first renewal applications filed with states needed the Centre’s nod till December 1999. Goa state took no such prior approvals, says the Commission.

What’s more, all renewal applications were to be disposed of within six months of date of receipt or deemed to have been refused. In the case of first renewals, such lapse may indicate a deemed extension only for a period of a year. But in Goa there are cases of deemed extensions for the past 24 years like that of Chowgule and Company in Sattari taluka. Another irregularity the Commission found was in the granting of the temporary working permits (TWP). A TWP ensures that if renewal of a lease gets delayed in MoEF, a mine owner can still use it for production after taking permission from authorities. On December 4, 2006, the Supreme Court passed an order asking states not to issue TWPs. It also directed MoEF to refer to the standing committee of the National Board for Wild Life (NBWL), the cases where clearance has been granted to mining activities within 10 km buffer zone of eco-sensitive areas. Goa forwarded a list of 74 such leases to MoEF. The ministry has not yet passed the list to NBWL and these leases are still operational. According to the Commission, 61 of the 69 clearances granted after the court order need to be referred to the NBWL committee. The Goa state instead referred these application to the Chief Wildlife Warden who had no authority to grant clearances.

The Commission recommends halting of these projects till NBWL gives its approval. The iron ore production should be brought equivalent to 2000-2001 to mitigate the impact of mining on the protected area, says the report.