It's an invitation to grab land, allege activists and opposition members

A global investors meet in Kochi this week has kicked up raging controversy. 'Emerging Kerala 2012' invites potential investors to explore business opportunities in the state and will showcase 232 projects in 26 sectors. Representatives from 52 countries are expected to attend the meet, scheduled between September 12 and 14. Political leaders, civil society groups and activists are irked because many of these projects, details of which are available on the 'Emerging Kerala' website, will adversely impact the environment.

It is the tourism projects which have provoked the maximum ire. Most of them are in eco-sensitive forest areas or on their fringes (see box). The leader of opposition in the state Assembly, V S Achuthanandan, even called for the cancellation of the meet.

“Most of the participants of 'Emerging Kerala' will be those who have the sole interest of getting quick returns on their investments,” says R V G Menon, environmental activist. “In the present scenario, real estate business is the money spinner and all these tourism projects are disguised real estate deals.” When his attention is drawn to the statement by Chief Minister Oommen Chandy that land would be given to investors only on lease and that ownership will remain with the state, Menon’s response is: “it is technically correct, the government is not selling the land. But giving land for 99 years lease is as good as selling it. Perhaps it is a win-win situation for the beneficiaries as they don’t have to shell out huge amounts for the land, but at the same time enjoy all the advantages of owned land.”

There have been several instances in Kerala when leased forestland has not been surrendered to the state on expiry of the lease and  parts of the leased land has been sold off and mortgaged, with the leaseholder virtually exercising all powers of a full-fledged land owner. What's more, the restraints on leases totally vanish if if the leased land is revenue land. 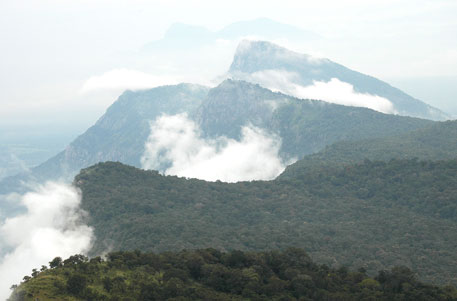 What complicates the issue further is the running feud between the forest, revenue and tourism departments over various tracts of land which are offered for the projects. The 25 acre (10.12 hectare) land in Nelliampathy on which a health resort is envisaged, is claimed by the tourism department to be its own, whereas the forest department claims to have documents which proves it to be forestland. Environmental activist Harish Vasudevan points out another facility for the future investor which borders on fraud. The land at Nelliampathy has a minimum market value of Rs 100 crore. The investment on the project is only Rs 25 crore. The investor can procure at least double the amount by mortgaging the land.

“All of those who invite capital for the so called development, usually declare that it will create hundreds of job opportunities,” says Harish. “But no such claims have been made in the case of 'Emerging Kerala'.’’ Even the pretence of social welfare is missing.

Prabhat Patnaik, economist and former deputy chairperson of Kerala Planning Commission has dubbed the 'Emerging Kerala' programme as the “primitive accumulation of capital” or the beginning point of capitalist mode of production.

What adds to the suspicion regarding the real motives of the organisers of the event is the role of INKEL (Infrastructure Kerala Ltd), a public-private enterprise in which the government of Kerala holds 26 per cent shares; the remaining 74 per cent stake belongs to private parties. Details of the 74 per cent stake-holdings are not available to the public. P K Kunhalikkutty, the state industries minister is INKEL's chairperson, T Balakrishnan, the industries secretary, is the managing director and Alkesh Kumar Sharma, managing director of Kerala State Industrial Development Corporation, is one of the directors.

The chief minister, however, claims that everything is only too transparent, and that was why there were “unwanted” arguments and disputes. A bunch of ruling coalition MLAs, including T N Prathapan, V D Satheesan and Sreyams Kumar, who had objected to the projects, made a U turn after the clarification by the chief minister, saying no violations of existing laws will be allowed and that all statutory studies will be done before an agreement is entered into.

This has, however, not placated the opposition or the environmentalists who ask why showcase and discuss projects which are legally, economically and environmentally not viable.

The very intention behind the star-classified event becomes ambiguous when mega projects like the Thiruvananthapuram-Mangalore High Speed Rail Corridor and the Thiruvananthapuram monorail projects are included in the meet, says environmentalist Menon. No discussion has taken place as to whether these are the best modes for meeting the transport needs of the state.

No detailed project report has been prepared and even the initial survey for the rail corridor project faced public protests. “How can a project be opened for bidding when even the basic ground work has not been done and the public has not been taken into confidence?” asks Menon.

There is also confusion as to what all projects are finally on the list. The chief secretary has made a statement that 51 controversial projects have been removed from the “global connect”, including the project to convert the Chandrasekharan Nair stadium at Thiruvananthapuram, the hub of sporting activity in the state capital, into an exhibition centre.

But there is no clarity as yet on the status of the nightclub that was envisaged at Veli, a beach resort in Thiruvananthapuram. There are contradictory reports that the managing director of INKEL and industries secretary Balakrishnan have been asked to explain how that project was included.

Everyone agrees that land is the most scarce commodity in Kerala. Why give it away when the natural tendency should have been to hold on to it? ask activists. V S Vijayan, former chairperson of Kerala Biodiversity Board, says that none of the proposed projects address the basic problems of the state.

“Why not a project for making agriculture an attractive and remunerative occupation?” he asks. He further says that only those developmental activities that would not endanger the forest system, wetlands and paddy fields should be implemented.

But the government seems to be determined to pursue the present course of development. Public works minister V K Ibrahim Kunju's recent comments in New Delhi, perhaps, sums up the government's approach. He said that it was the people and the media that hindered development of roads in Kerala.