The chances of reduced rainfall between August and October is 60 per cent, says Australia’s Bureau of Meteorology 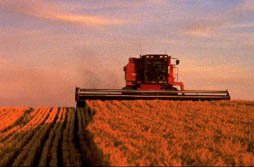 A looming El Nino could threaten wheat production in southeast Australia. There is a more than 60 per cent likelihood that the rainfall in the region would be below median between August and October, Australia’s Bureau of Meteorology said on July 24.

The government, too, has predicted a decline in wheat production this year, reports Bloomberg.

However, there is a difference of opinion on the impact of an El Nino on crop production, says a news item published in ABC on June 11. It quotes the Australia crop report released on June 11 by the Australian Bureau of Agricultural and Resource Economics and Sciences (ABARES): “While below average rainfall is often associated with an El Niño event, the timing of the rainfall also influences the effect of these events on crop production.”

Wheat is grown in July and harvested in September. Australia’s weather bureau had predicted in May that the country could see the impact of El Nino in July.  The ABARES report had brought down the estimates of wheat production for 2014-15 from 24.8 million tonnes to 24.6 million tonnes. It said that the fall in wheat production would decline by 9 per cent this year.

The Bureau of Meteorology had also said on July 15 that that there is a 70 per cent chance of an El Nino this year.