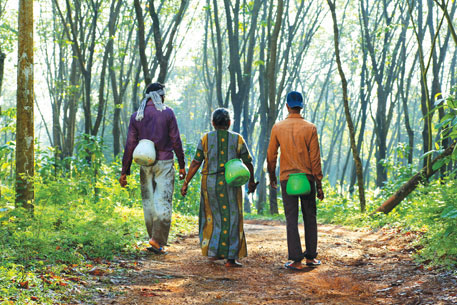 Krishnan Kutty Nair, (59), a resident of Peravoor in Kannur, was found hanging from a tree in a rubber estate near Moonnilavu town in Kottayam district.

The farmer had also sold off his house to buy a rubber estate and took loans from various banks and individuals, the note read.

In the note, the deceased said if the price of rubber was to stay below Rs 150, it was not viable to grow it. Like him, many more small farmers would end their lives, Nair cautioned.

It was to highlight the peril being faced by rubber growers that Nair chose the finance minister’s constituency to take his life, the note read.

Kerala’s rubber sector is in severe crisis due to the steep price crash of natural rubber.

The state is the rubber capital of the country and accounts for 83 per cent of the country’s natural rubber production. A total of 74 per cent of area in Kerala is under rubber cultivation. The state has more than one million growers and half a million people work as tappers in various rubber estates.

The rubber sector is also dominated by small and marginal farmers who have less than one hectare of land. The price of RSS 4 grade rubber, the most popular variety in the country, was as low as Rs 39 a kg in 2003. It went up steadily since then and rose to Rs 208 in 2011-12, but then witnessed a steady downslide. In December 2014, it went down to Rs 113, a five-year low. At present, it is being sold at Rs 133.45 a kg. Farmers have stopped tapping their trees due to the low price.